The history of Croatia begins in the early 6th century, when the Slavic populations, subject to the Avars, migrated from the region of the Middle Danube to the south-east, in the region between the Drava and the Sava and towards the Adriatic coast. See Countryaah for population and country facts about Croatia.

Croatia is one of the successor states of Yugoslavia. In 1991 the majority of Croatians and Serbs lived in Croatia. There were also many minorities (including Italians, Slovenes, Hungarians, Albanians, Bosniaks). However, due to displacement, ethnic cleansing, forced resettlement and the flow of refugees from Bosnia and Herzegovina after the breakup of Yugoslavia, large population shifts have occurred. It can therefore be assumed that the population structure has changed significantly.

The strong mixture of people belonging to different peoples leads to a coexistence and a mixture of different cultures and religions, which is not always unproblematic. Most Croatians belong to the Catholic Church, the followers of the Serbian Orthodox Church form a minority, but there is also an Islamic minority and a small Jewish community. 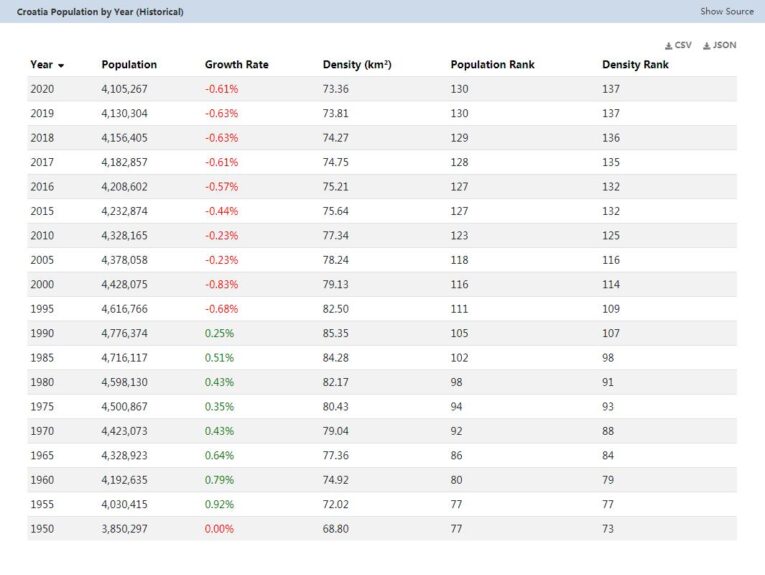 Towards the end of the eighth century Charlemagne, having beaten the Avars, transferred the Signoria of Croatia to the Marquis of Friuli; religiously Croatia depended on the Patriarchs of Aquileia.

Later on Avarica Croatia, that is the part between the Drava and the Sava, entered the Germanic political orbit, while Adriatic Croatia became part of the Italian Kingdom.

Adriatic Croatia enlarged during the 9th century; his dukes extended their dominion also over the Avarica Croatia and one of them Tomislavo, in 910, assumed the title of King.

But over theXI century the expansionism of Venice and the Byzantine Empire outside and the internal struggles weakened the kingdom of Croatia which, between the end of the XI century and the beginning of the XII, ceased to exist and became a vassal of the Kingdom of Hungary.

The new ducal regime under the Hungarian crown lasted from 1102 to 1536, and in this period the Croatian territory was decreasing more and more due to the action of the Venetians, the Byzantines and above all the Turks, the victories of which determined, in the second half of the XV century, an imposing exodus of Croatians from the north, so that the name of Croatia was restricted to the western part of the region between the Drava and the Sava.

The Hungarians beaten by the Turks at the Battle of Mohacs in 1526, Croatia passed into the domain of the house of Austria and remained there until 1918, except for the period 1809/13, in which it was united with the Napoleonic Illyrian provinces.

And in this period a nationalist revival movement began to emerge. In parallel, the same was happening in Hungary. There in 1848 a revolution broke out. Croatia saw in this an occasion to be able to detach itself from Hungary and acquire its own physiognomy. And this happened in 1849 when it had the Constitution and could also annex the city of Rijeka with its coast. But everything always directly dependent on the Habsburg crown.

This lasted until 1861 when the Croatian Diet protested the situation and was therefore dissolved. And since no other Diet could be elected, from 1865 to 1867 the nationalists, led by Monsignor Strossmayer, bishop of Gjacovo, worked with alacrity to be able to form a kingdom of Croatia-Dalmatia-Slavonia, also including the islands of the Gulf of Kvarner.

Everything was useless because Hungary and Austria came to a compromise and all Croatian hopes of autonomy were disappointed.

In 1868 a Hungarian-Croatian compromise was also established, for which Croatia saw its autonomy increase from Hungary, and Franz Joseph, emperor of Austria, granted authorization to elect another diet, as long as it was more subject to him.

The Diet was elected in 1873. Two years later, Mazuranic was the leader who governed peacefully and introduced important reforms. Due to the intransigence of some Croatian nationalists, bloody conflicts took place with Hungary, and Croatia from 1883 to 1903 was subjected to a harsh regime of oppression.

The economic situation also got worse and worse until in May 1903 riots occurred in Zagreb and in some other cities, against the Hungarian landowners.

In 1908 a new period of repression came to afflict the Croatian people, who continued to defend their national autonomy against not only Austria and Hungary, but also the South Slavs.

In 1918, after the First World War, Croatia became part of the Triune Kingdom of Yugoslavia. And after the occupation of this by the Axis forces, in the spring of 1941, in the middle of the Second World War, Croatia was constituted in the Independent Kingdom and as king was designated Aimone of Savoy-Aosta, Duke of Spoleto, who however he never ascended the throne and never performed any function. He took the name of Tomislav II, but abdicated before the end of the war. And that was the moment when Croatia entered the Yugoslav state team.

It was one of six Yugoslav federal republics, and also one of the best from a commercial point of view, having the most efficient ports.

But he had to comply with the deliberations of Josip Broz, alias Tito, imposed on all regions and, therefore, he found himself subjected to expropriation without compensation and to endure the elimination of that class, known as the bourgeoisie, which in totalitarian regimes must forcefully submit to the highest interests of the state.

Even the ever-existing contrasts between Croats and Serbs, due to the Serbian preponderance in Krajina, the Croatian region, had to be mitigated but certainly the reasons that had provoked them never died.

When in the sixties in Yugoslavia the renewal and self-management by V. Bakaric, a Croat very close to Tito, was pursued, also in Croatia they felt immediate benefits. The economic situation in 1965 received greater impulses from tourism, from remittances from emigrants and from the numerous orders arriving from the Third World.

Immediately the top leaders made decentralization of power and favored the expansion of democracy. In 1966, the abuses of power against Serbian A. Rankovic against Croatia were discovered and this caused the resurrection of those old grudges never dormant between the two ethnic groups.

Many intellectuals, with the creation of a nationalist movement called “Maspok”, brought to light the many problems related to the language, culture, history and economy of Croatia itself. In 1971, on the occasion of a revision of the Federal Constitution, these problems were more accentuated so that the Serbs, foreseeing unrest and rebellions, were forced to arm themselves.

The fear of the onset of a new disastrous conflict forced Tito to intervene and command the elimination of the Maspok, causing the top exponents to be arrested. A deep crisis arose; the top Croatian leaders against the nationalist yearnings of the people were forced to oppose obstinate silence.

And it came to 1989 when a vast process of democratization began throughout the communist world, especially after the fall of the Berlin Wall.