The history of Czechoslovakia is that of a small nation close to too powerful peoples. Its geographical position, between Germany, Austria, Poland, Hungary and Russia, marked for the small nation a fate made of long and terrible struggles, but very often useless.

In the VI century after Christ some Slavic tribes, coming from Asia, occupied the territory and drove out the inhabitants of Germanic origin. A tribal chief, named Samo, around 650 organized these barbarians into the state. But the first real state was formed in the 9th century, under the reign of Mojnir. It consolidated and grew with the annexation of Slovakia and Silesia, and took the name of “Great Moravia”.

This state became truly famous and powerful when it was placed under the dynasty of great kings, the Premyslides, in the tenth century.

They developed western culture in the area and with them began the cult of Christianity in Czechoslovakia.

In 1025, however, the country was attacked by the Magyars who seized before Slovakia and then also threatened Czechoslovakia which asked for protection from the Germanic emperor Federico Barbarossa. The emperor immediately accepted the request for help but his purpose was essentially to be able to annex that province, which was then called Bohemia.

But he was forced to maintain peaceful ties until the wise kings Premyslids reigned.

These peaceful relations began to wobble when in 1310 a king of the Germanic dynasty of Luxembourg ascended the throne of Czechoslovakia. And then the sights of Germany were finally achieved.

Until the beginning of the 16th century, the Czech people always fought within their land, divided into two factions: the one that supported the German Empire and the one that yearned for their freedom. External wars were often added to internal disputes, which almost never assigned victory to the Czechs.

It came to 1526, a fatal year for Czechoslovakia, because the Parliament, exhausted by the continuous internal struggles, offered the crown of the kingdom to Prince Ferdinand of Habsburg. For almost 400 years Bohemia remained under the rule of the Habsburgs and frequent revolts were of no avail.

Of the various rebellions, that of 1618 was certainly the most tragic. It happened during the “Thirty Years War” that broke out for religious reasons. At that time, not all Germanic regions had joined Lutheranism, some had remained tied to Catholicism. In that year the emperor Matthias I of the Habsburg house sent messengers to Prague to repress Lutheranism. Upon their arrival they were thrown out of the windows of the royal castle, so much so that the episode went down in history as the “Defenestration of Prague”.

This fact sparked a war between the imperial troops, led by Ferdinand II, successor of Matthias I, and those Bohemians who were easily defeated in the battle of the “White Mountain” on November 8, 1620. And for another three centuries the Czechs remained under the foreign domain.
When, as has already happened in many parts of the world, the principles of freedom and independence of the French Revolution also entered Czechoslovakia, the people united felt encouraged to fight against the foreign invader. But in the meantime the Habsburg house had become a powerful Austrian Empire, which with its colossal preponderance got the better of the Bohemian patriots. Nor did the situation change in 1848, and wars for freedom had now invaded all the countries of Europe under foreign domination.

At the outbreak of the First World War, many Czech patriots took the opportunity to return to office and gain the freedom of their country and thus fled their land and joined the French, Italian and Russian armies. They were so numerous that the Allies, at the end of the victorious war, in August 1918 declared Czechoslovakia an Allied Country and as such was recognized in the Treaty of Versailles, an independent nation. The 400-year-old dream for the Czechs had finally come true. Czechoslovakia was a republic.

But, as often happens in countries where populations are made up of different ethnic groups, even in Czechoslovakia, given the diversity of Bohemians, Moravians and Slovaks, conflicts soon arose. See Countryaah for population and country facts about Czech Republic. These were aggravated when Hitler began applying his aggressive policy in Europe. Slovakia seized the opportunity to proclaim its independence. It was 1939, the beginning of March. Fifteen days later Hitler invaded Czechoslovakia and occupied it in a very short time.

Due to the expulsion of most of the Germans after the Second World War and the replacement of the Slovak Republic in 1993, the population structure of the Czech Republic is very uniform. Today about 95% of the population is Czech.

The regions with the highest population density are Central Bohemia with the center Prague and the industrial regions in Northern Bohemia and Northern Moravia. The Bohemian Forest has a low population density. Urbanization is very advanced. About three quarters of all Czechs live in urban settlements. The largest cities after Prague are Brno, Ostrau (Ostrava), Pilsen, Olomouc (Olomouc) and Reichenberg (Liberec).

School attendance is compulsory for nine years in the Czech Republic. There are universities in Prague, Olomouc, Brno, Opava, Pilsen and Aussig as well as two technical universities. 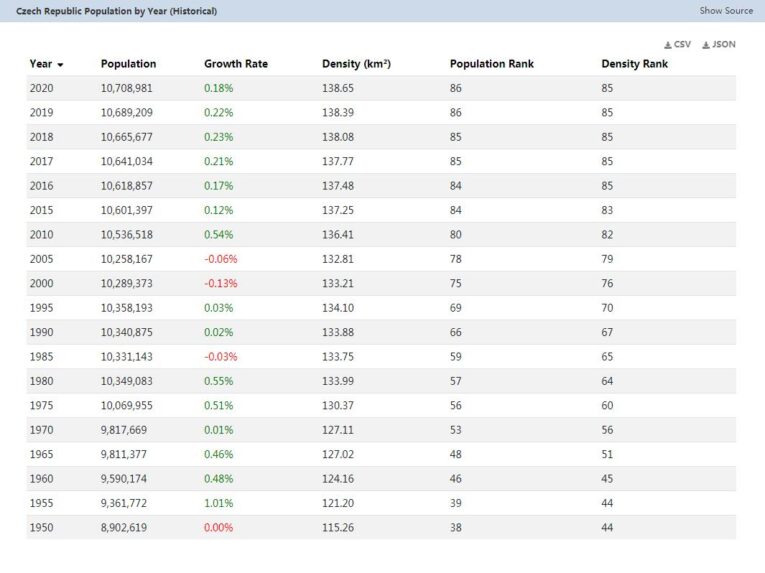 Also this time the Czechoslovaks did not give up and fought strenuously, after forming their government in exile in London. Organizations of partisans arose who from inside fought the enemy just as outside regular troops did the same thing alongside the Allies. At the end of the war, Czechoslovakia reconstituted the state which, in 1948, then became a communist-type republic, linked to the blockade of the East under the aegis of the Soviet Union.

The village began its march under the guidance of K. Gottwald. One of the main objectives of the new regime was to completely dethrone the Catholic Church. The breakdown of diplomatic relations with the Holy See occurred in March 1950, with the expulsion of the Apostolic Nuncio.

Between 1949 and 1953 the first five-year plan was applied, which doubled the production relating to heavy industry. The struggle for the acquisition of power had two leading figures in Gottwald, supported by Moscow, and Rudolf Slanski, high representative of the Communist party. The latter was later accused of treason; then tried and hanged on December 3, 1952.

The year 1953 was that of political and economic upheavals; the death of Stalin and that of Gottwald marked the start of the “new course”, with the election of Antonin Zapotocky as President of the Republic, and President of the Council Viliam Siroky. In economics, light industry and agriculture were favored. In January 1956 another five-year plan was launched with strong investments aimed at increasing national income by 50%.

For internal politics A. Novotny, the first party secretary, following Khrushchev’s ideology, implemented a softening program and in fact greatly eased the pressure exerted by the state police.

For the foreign one, while following the orientation of the Soviet one, we also turned to the West by eliminating the “cold war”, and relations of peaceful coexistence were established. On November 13, 1957, when Zapotocky died, Novotny also became President of the Republic. On July 12, 1960, a new constitution was launched, the essential points of which were:
– the definition of Czechoslovakia as a “socialist state”;
– recognition to the communist party of the task of leading the country;
– reconstitution of the National Committees for local self-government;
– reconfirmation of the socialist collective ownership of the state, with the existence of small
industrial and agricultural enterprises ;
– wide autonomy of Slovakia;
– reconfirmation of ties with the Soviet Union.