There are some works of transition to the new style: not exactly the strange domes of the cathedral of Zamora, of the old cathedral of Salamanca and of the collegiate church of Toro, which perhaps come closer to the Muslim style than to the oriental one; but certainly some buildings, such as the Pórtico de la Gloria in the cathedral of Santiago de Compostela, one of the first Spanish constructions with pointed arches, the work of master Mateo (between 1168 and 1188).

Contemporary, and perhaps by Mateo himself, are the buildings of Carboeiro (Pontevedra, near Compostela) and probably the nave of the cathedral of Zamora (1174) and that of Ávila. The new vault system came when the construction of many churches in Romanesque had already begun, hence the strange mixture of the two styles. The Cistercian monks had the same role in the spread of Gothic as the Cluniacs had had in that of the Romanesque. It would take a long time to enumerate the great monasteries of that order which from Alcobaza in Portugal to Poblet and Santas Creus in Catalonia gave an intense impulse to construction in the primitive or transitional Gothic style. Moreruela in Zamora is for Gómez Moreno the oldest Cistercian example in Spain, prior to 1168; Lambert considers it instead of the end of the century. Poblet is more important, his influence in Catalonia was decisive; so in Tarragona the cathedral was built in the transitional Gothic style (its inauguration took place in 1220, when it was not yet finished). In Castile there is also a parallel influence, that of the monastery of Huerta on the cathedral of Sigüenza, to which the cathedral of Cuenca and the Huelgas of Burgos are connected, even through the intervention of the same master, according to Lambert. The cathedral of Ávila, with its double ambulatory and its warlike aspect (because the upper part is incorporated into the surrounding wall), is perhaps the work of a master Fruchel, a foreigner, who died as early as 1192, who knew Burgundian art and Saint -Denis. The military aspect is also characteristic in the cathedral of Tuy (Galicia), where the

According to HEALTHVV, the great gothic architecture built into a system penetrates Spain during the reign of Fernando III the Saint, cousin of Saint Louis, king of France. The two great cathedrals of Burgos and Toledo are contemporary in everything; of that of León, a little later in its execution, we can perhaps say that it is a monument in a certain way foreign to Spanish art and that did not teach it.

The cathedral of Burgos (v.), Begun in 1221 or 1222, and consecrated in 1260, had in primitive simplicity, now hidden under the profuse covering of the century. XV, evident similarities with the French cathedrals of Coutances and Bourges, but with original features. These predominate instead in the most notable of the great Gothic churches of the peninsula, the cathedral of Toledo (v.), Of which the first stone was laid in 1226 or 1227 (but the work had already begun before), a robust construction with slight hints of Moorish origin. The cathedral of León is an entirely French construction in which, as in the cathedral of Beauvais, the aim is to achieve unbelievable lightness.

The full Gothic style was popularized and popularized by the monastic, Franciscan and Dominican orders. Dominican was the first authentic Gothic temple in Catalonia, St. Catherine in Barcelona (1223).

Even the list of Spanish cathedrals and Gothic churches alone would be endless: it is a continuous series for three centuries. In the century XV the Cathedral of Seville is built; in 1416 the immense vault of Gerona was launched; in the sixteenth century the cathedrals of Salamanca and Segovia were built with such mastery of technique and with such perfection, that what is lacking in the effort to obtain originality is compensated for by the victorious complex of constructive problems solved happily.

The Gothic, like the Romanesque, also had a popular development in Spain with humble materials (bricks, plaster, molded walls) that the Moorish knew how to handle with great skill. The main work in this style is the cloister of Guadalupe (Cáceres), and, in the military type, the castle of Coca (v.). This art, of Gothic forms but of technique and Moorish whims, left innumerable monuments in Castile and Aragon. Thus some elements took root, eg. the wooden ceilings, which continued to be built in advanced times of the Renaissance and even in full Baroque.

It is not possible to enumerate the sculptures in the numerous Gothic facades of Spain here: we mention only those, grandiose as a whole, from León and Burgos, especially the first, close to and comparable to the most beautiful in France. In Burgos you can also admire the groups of statues in the cloister, in Toledo the sculptures in the main chapel. 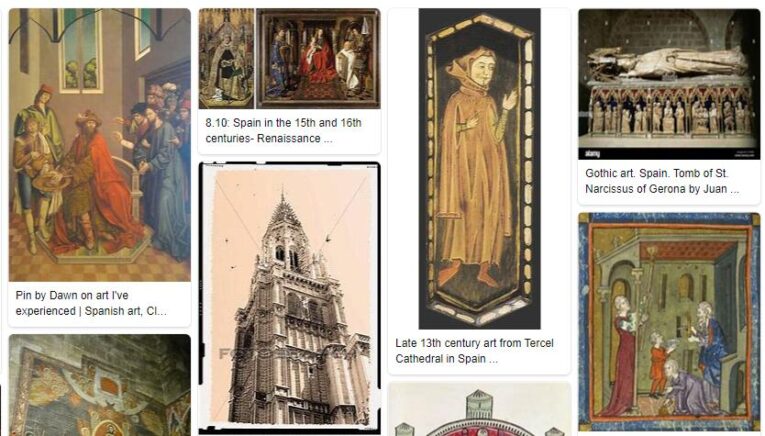