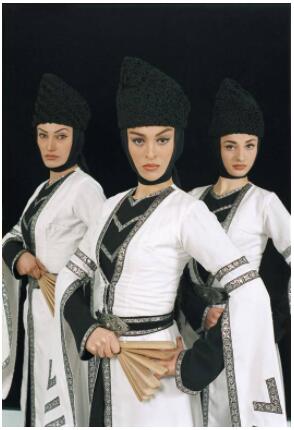 The culture of this relatively small country is as diverse as the nature, the linguistic and ethnic elements of Georgia. An excerpt could be experienced in many German cities in 2017/18 as part of the German-Georgian year of culture. Events can be found on the website of the Georgian Cultural Center Berlin. At the same time, Georgia was guest of honor at the Frankfurt Book Fair in October 2018 under the title “Georgia – Made by Characters”. Stefan Mesch’s blog on the most interesting books by Georgian authors is worth reading.

“What the Georgians sing is more important than any new discoveries in modern music. It is incomparable and simple. I have never heard anything better!” (IGOR STRAWINSKY)

Traditional Georgian music is polyphonic. The uniqueness of this centuries-old tradition has been declared an intangible world cultural heritage by UNESCO.

UNESCO masterpiece of the oral and intangible heritage of humanity

song Love song from Tusheti: Zkaroze (at the source)

soundtrack from the film Mimino by Rezo Gabriadze

The first state dance ensemble was founded in 1945, directly after the Second World War, by the dancers ILIKO SUKHISHHWILI and NINO RAMISCHWILI. The ” Sukhishvili – Georgian State Dance Academy ” completed more than 200 tours for more than 50 million spectators in more than 1,700 cities in 87 states and became a formative role model for generations of other dancers and dance groups in the country.

The director and general manager of the Georgian National Ballet with around seventy dancers and a traditional orchestra is the son of the founder, Tengiz Sukhishvili. The grandson Iliko Sukhishvili Jr. is one of the chief choreographers, while his sister Nino Sukhishvili is the assistant manager and costume designer.

Postage stamps reflect the diversity of culture: from painting to circus to caricature.

The “Banquet” / ” Supra ” is a special cultural asset. The Supra is not only seen as an opportunity to establish networks, strengthen alliances and trade information, but also as a means of education and the embodiment of national culture. A “Tamada” is chosen to be the table guide and creates a clever table that follows strict rules. Even as a foreign guest, you cannot escape these table manners.

The legend of the “martyrdom of St. Shushanik” from the first half of the fifth century, written by Jakob Zurtaweli, is considered the first literary work to have survived in Georgia.

In the “Golden Age” Georgian literature reached its first climax with the masterpiece “The Warrior in the Tiger Skin” by Shota Rustaveli.

Watchtang VI. (1675-1737), who as a statesman was almost entirely condemned to ineffectiveness, earned merit as a scholar, poet and translator. It is thanks to his initiative that the first printing house was established on Georgian soil. A short time later, Wachtang’s tutor, Prince Sulchan-Saba Orbeliani (1658-1725), published the first dictionary of terms in the Georgian language.

One of the most important writers of the 20th century was Konstantine Gamsachurdia, who studied in Germany from 1912 to 1919 and obtained a doctorate from the Humboldt University in Berlin. His novels “Dawit the Builder” and “The Master’s Right Hand” have also been translated into German.

Among the writers of the Soviet period, Nodar Dumbadze in particular deserves attention, whose novels read like chronicles from the life of “the little man”. Modern literature also includes Otar Tschiladze, Revas Inanishvili, Guram Pandzhikidze.

According to homosociety, the first Georgian film was made in 1912 and accompanies the journey of the poet Akaki Tsereteli (1840-1915) through the western Georgian provinces of Ratscha and Letschchumi.

Nikolos Schengelaia was the most famous film director in the 30’s. He was married to the actress Nato Watschnadze, the first female film star. The son Eldar is one of the most influential directors today. In 1956, Magdana’s donkey won a golden palm in Cannes. It was director Tengis Abuladze’s first film. In the following years he achieved international fame with the films “Tree of Wishes” and “Reue”. In 1987 Abuladze won the special prize of the Cannes jury for “Reue” – a film about tyranny and fear during the Stalin era.