Iceland is an island republic in northern Europe, in the northern Atlantic south of the Arctic Circle. The country is located on the mid-Atlantic ridge, 970 kilometers west of Norway and is Europe’s westernmost nation and second largest island.

The country, which is less than a third of Norway, is a geologically young country with volcanic activity. Iceland was populated from Norway and the British Isles in the 8th and 9th centuries. The capital is Reykjavík.

In 2008–2011, Iceland was hit hard by a financial crisis. In recent years, the economy has stabilized and is growing.

The name Iceland is probably after the drift ice’s early seafarers looked outside northern parts of the island.

Iceland lies where the North American and Eurasian continental plates are sliding apart. Much of Iceland is a bare plateau 300-700 meters above sea level with lava deserts and mountains. The country has many hot springs and about 150 volcanoes. The highest mountain is Hvannadalshnúkur, 2119 meters above sea level. About 11,900 square kilometers of Iceland is covered by glaciers, the largest of which is Vatnajökull, which is Europe’s second largest glacier.

The plateaus are divided by fjords and valleys. The coast is strongly cut except in the southwest. Many rivers have great water flow and magnificent waterfalls, such as Dettifoss, Goðafoss and Gullfoss. The largest lowland area is located in the southwest.

Off the southwest coast lies the archipelago Vestmannaeyjar. Otherwise, there are few islands. Iceland has few lakes, the largest of which are Thorisvatn, Thingvallavatn and Mývatn. In 1963, the new island of Surtsey was formed by a volcanic eruption. The ring road around Iceland is 1332 kilometers long.

Iceland has a sea ​​climate balanced between cold polar ocean currents and the warm Gulf Stream. There are cool summers and mild winters. The average temperature in Reykjavík is +0.4 ° C in January and 12.5 ° C in July. The average for the year is 5.5 °C. The coast in the north and most of the inland has tundra climate.

Higher parts of the country have sparse or no vegetation on rock and sand planes. The lowlands have fertile ground cover where grasses and sedges form good pasture for sheep, horses and cattle. There are thickets in large areas with former forests, which were destroyed by logging, erosion and volcanic eruptions. In some places there are birch forests and Hallormstaðaskogurinn in Fljótsdalshérað is the island’s largest forest with an area of ​​7.4 square kilometers. Probably 30-40 per cent of Iceland was covered by forest before the inhabitants settled in the 800s, and eventually the need for fuel, ships and houses for deforestation. Today, about one percent of the land is forest covered, but a forest plan assumes that the area will be doubled by 2100.

Most of the approximately 575 plants are northern European species and only 18 of these do not grow in Norway. A few are native, such as hovering and dandelion species.

Mountain reefs are the only native land mammals. Reindeer were introduced from Norway, and mink has escaped fur fur. The Icelandic horse is a popular pony breed that is exported to large parts of the world. Iceland has around 80,000 horses and 460,000 sheep. Polar bears sometimes come in with the drift ice. In the sea there are several seal and whale species. Of the approximately 250 species of birds, 75 nest. The national bird Icelandic hunting falcon nests in mountains. Iceland has about four million puffins. Several places on the island are bird cliffs, Látrabjarg is Europe’s largest. There are about 350,000 whales in the sea around the island.

Important fish species are cod, herring, capelin and haddock. In the rivers there is salmon and trout.

The insect fauna is poor in species. Spring mosquitoes can be troublesome, but it does not stick.

Iceland has a high degree of gender equality. In 1850, women received the same inheritance rights as men.

Iceland’s health care system is among the world’s best developed. Life expectancy is 83.6 years for women and 80.6 years for men (2015).

The official language is Icelandic, which evolved from the southwest Norwegian dialects to the earliest immigrants. Written Icelandic has changed little from the Norse native language. Icelandic is the mother tongue of the entire population. Icelandic is also the first language for 7900 residents in Canada and 9700 in the United States. Most Icelanders speak English and one Scandinavian language.

Iceland has distinctive names. Foreigners who take Icelandic citizenship must by law take Icelandic names. Women do not take men’s surnames by marriage. The most common patronymics are Jónsdóttir and Jónsson. 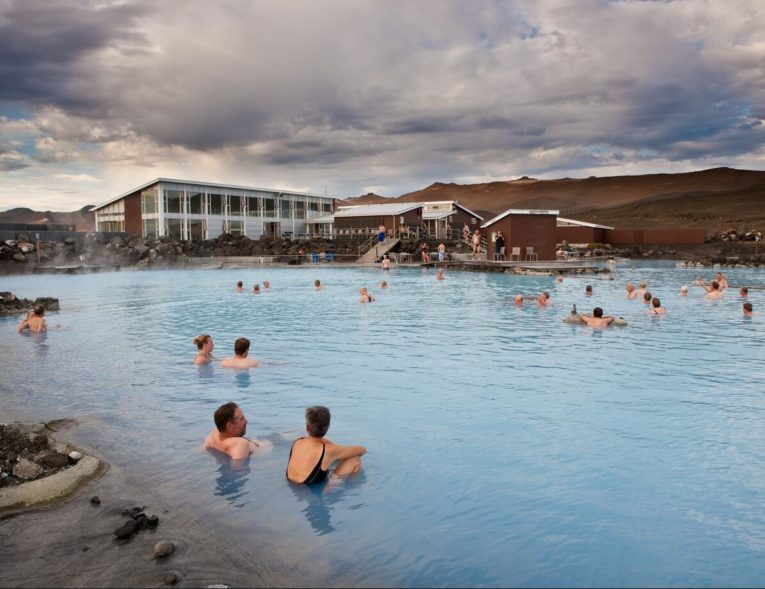 Iceland is a parliamentary-democratic republic. The head of state is the president, who is elected for four years. The National Assembly Alltinget, the world’s oldest functioning parliament, has 63 members elected in general elections for four years.

Iceland is divided into 7 regions, 23 counties and 79 municipalities.

Iceland does not have military forces, but has a semi-military coastguard with four armed patrol ships, one aid vessel, one aircraft and three helicopters.

Iceland has for a long time had a high degree of gender equality. In 1850, women received the same  inheritance rights  as men, and in 1980 Iceland became the world’s first female president, with Vigdís Finnbogadóttir.

Old writings and archaeological finds show that Irish monks came to Iceland before 800 AD The Norwegian Naddodd and the Swede Gardar Svåvarsson came to Iceland about 860.

The first permanent settlement was probably initiated by Ingolfr Arnarson from Fjaler in 874. During the settlement period (ca. 874–930), 430 settlers, most Norwegians, went ashore in Iceland to escape the harsh rule of Harald Hårfagre. Some settlers also came from the North Sea Islands and others were cellars. The entire island was occupied by about 900, and about 930 Iceland had maybe 9,000 inhabitants.

The climate was milder at that time and grain was grown in addition to feeding, fishing and catching. About 930 the Allting, with the Gulatinget and the Gulating Act as a pattern, was created. The country was divided into 12, later 13 district districts; in 965 in four quarters. Christianity was passed by law at Allting in 999/1000.

In 1262–1264, Iceland was placed under Norway as a result of internal divisions, peace needs and economic dependence on Norway. All administrative functions were taken over by royal officials. In 1402-1404 half of the population died of plague and many farms were abandoned. As the Norwegian state became increasingly weakened in the Late Middle Ages, political control of Iceland was transferred to Danish hands. In 1536, Iceland formally became part of Denmark. Famine, plague, earthquake and volcanic eruptions took many lives. In the period 1783–1785, one fifth of the population died.

At the Kiel Peace in 1814, Iceland remained part of Denmark, and gradually a period of restoration began. In 1843 Allting was restored and in 1874 Iceland was given a free constitution. In 1918, a constitution was passed which made Iceland an independent state in the union of workers with Denmark.

In 1940, the country was occupied by British troops, which were eventually replaced by American troops. The following year, the parliament canceled the union with Denmark with three years’ notice. Following a referendum in 1944, Iceland was declared a republic on June 17, 1944, and Sveinn Björnsson became the country’s first president.

In 1946, the Americans withdrew from Iceland, but retained the Keflavík base against the defense of the country. In 1958, 1972 and 1975, there were confrontations with the United Kingdom, which deployed warships to protect its fishing fleet during the Turkish war. In 1976, the United Kingdom first recognized and in 1980 also Norway’s 200-mile fishing zone.

In 1980 vigdís finnbogadóttir world’s first democratically elected female president (until 1996). In the 1980s, Iceland was one of the richest and most developed countries in the world. In 2008, the country’s banking system collapsed, leading to strong political turmoil. The country underwent a severe economic recession, with three banks collapsing, which ended in 2011. The country’s 2016 president is Guðni Thorlacius Jóhannesson. In the 2017 election, none of the government alternatives got a pure majority, but the Independence Party was still the largest in the Allting, with 16 out of 62 seats, and Prime Minister Bjarni Benediktsson formed a coalition government.

Iceland is where the North American and Eurasian continental plates glide apart, and in this rift on Þingvellir you can see both.

Only 0.1 percent of Iceland is cultivated land, but agriculture employs 5.3 percent of the population. Animal husbandry is the main industry, especially sheep husbandry and production of dairy products. A little barley and oats are grown, and hay, potatoes and root crops are produced, and in many places vegetables in greenhouses are heated by hot springs.

The fishing industry is most important in the Icelandic economy. Fish and shellfish make up about 12 percent of GDP and employ almost five percent of the workforce. The 200-nautical-mile fishing limit provides Iceland with a national fishing area of ​​758,000 square kilometers. The three most important fish species are cod (257 572 tonnes in 2017), saithe (60 237 tonnes) and redfish (50 800 tonnes).

The most important industrial sectors are fish processing, aluminum production and the production of artificial fertilizers and cement. Shipyards and the textile industry also play a major role. The country has no mineral resources, but is energy rich with the power resources associated with the watercourses and hot springs. 24.4 per cent of the employed work in manufacturing. The country is investing heavily in the IT industry, biotechnology and tourism. Service-providing industries comprise 70.3 per cent of the labor force (2012). 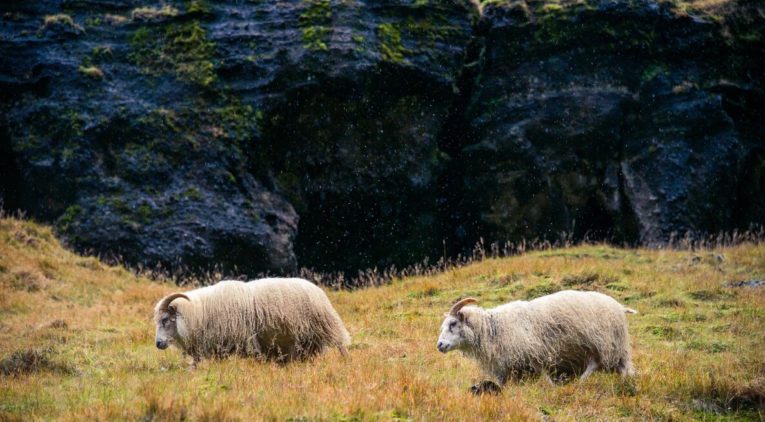 Iceland has little forest, but plenty of land suitable for sheep grazing. Both wool and sheep meat have historically been very important for survival on the harsh island.

There is ten years of free and compulsory schooling for children and adolescents aged 6-16. Almost all of them continue in 2-4-year-old high schools. Iceland has five universities; many study abroad.

The Norwegians who settled in Iceland during the Norse period had an oral poetry, and the anonymous Eddict poems are the oldest. The shell poetry also came to Iceland from outside, especially from Norway.

The greatest name in Icelandic medieval literature is Snorre Sturlason (1179–1241). His Heimskringla from around 1230 are extensive royal sagas, and he also wrote Edda (The Younger Edda), which is a textbook in Norse mythology and shell art.

Icelandic literature came to life in the 19th century. The most poignant in lyric in the second half of the 19th century are Matthías Jochumsson (1835-1920) and the more modern Stephan G. Stephansson (1853-1927). Realism had a breakthrough with Gestúr Pálsson’s short stories.

The most important Icelandic writer of the 20th century is the Nobel Laureate Halldór Kiljan Laxness (1902–1998). Other important prose writers are Thór Vilhjálmsson (1925–2011), Einar Már Guðmundsson (1954–) and the novelist Frida Áslaug Sigurðardóttir (1940–2010); all of them have been awarded the Nordic Council Literature Prize.

Iceland’s national sport is glima, a form of wrestling that is believed to have originated in the Middle Ages. Other popular sports are handball, basket ball and soccer. The Icelandic national team reached the quarterfinals of the European Football Championship in 2016.

Beer was banned in Iceland between January 1, 1915 and March 1, 1989. A referendum in 1908 ended with a ban on all alcoholic beverages and the ban came into force in 1915. Ten years later, red wine was allowed, followed by booze in the 1930s. However, beer was still banned because beer was perceived to be particularly tempting for youth. In the 1980s there was a growing demand for the repeal of the last ban, and since 1989 Icelanders have swept March 1 as a national beer day. 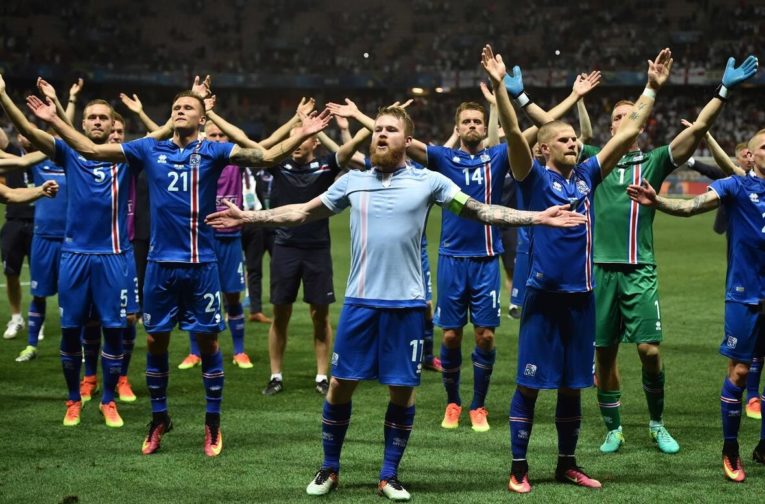