Estonia is the northernmost of the three Baltic states and has land borders with Russia and Latvia. The capital and port city of Tallinn (German Reval) is relatively protected on the Gulf of Finland. Estonia is predominantly a flat land shaped by the Ice Age.

About two thirds of the population are Estonians. There are 400,000 Russians living in the country, but their number is decreasing due to emigration.

Mechanical engineering and the textile industry are important branches of industry. Recently, the construction of electronic devices has played an increasingly important role.

Abbreviated as EE by ABBREVIATIONFINDER, Estonia borders in the west on the Riga Bay of the Baltic Sea, in the north on the Gulf of Finland, in the east – with the border mainly through the Peipus Sea – on Russia and in the south on Latvia. 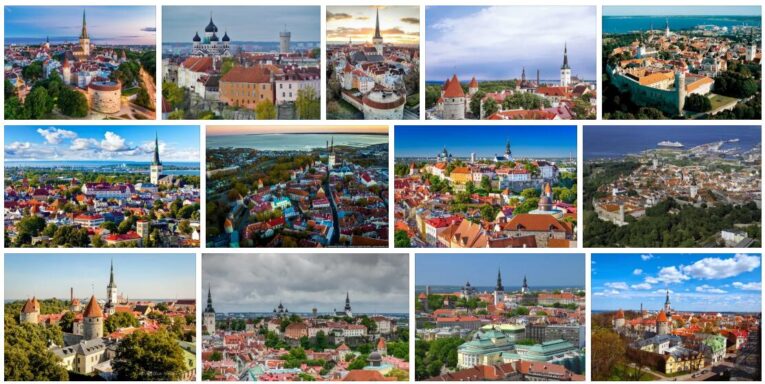 Estonia lies in the northwest of the Eastern European Plain and includes the north of the Baltic States. The surface is shaped by ice age glaciers. Most of the flat to hilly land is below 100 m above sea level. The lowlands in the east are heavily muddy due to the high groundwater level. In the southeast of the country, terminal moraines rise up to 318 m as isolated, domed elevations.

Estonia is rich in lakes and rivers. The largest lakes are Lake Peipus, Lake Pleskauer, the main part of which belongs to Russia, and Vortsjärv. The most important rivers are the Narva, border river with Russia, and the Pärnu.

About 1520 islands lie in front of the strongly indented west coast, rich in bays. The largest are Saaremaa, Hiiumaa (Dagö), Muhu (Moon) and Vormsi (Worms). In the north, the coast descends mainly in a steep limestone step up to a maximum of 56 m high, the Glint, towards the Gulf of Finland. In winter, the sea near the coast freezes over for a short time.

Estonia belongs to the mixed and deciduous forest zone of the cool temperate latitudes. About 45% of the total area is mainly made up of pine and spruce, but also with birch. About a fifth of the country is occupied by moors and swamps. There are four national parks and 213 different protected areas in Estonia.

Since 1918 Tallinn (German: Reval) the capital of Estonia. The port city with a population of 412,000 is located on a bay of the Gulf of Finland. It is the cultural and economic center of Estonia. Tallinn is home to the Estonian Academy of Sciences, several universities, a conservatory and other colleges. It has numerous museums and theaters, a philharmonic hall, a botanical and zoological garden and a film studio. Tallinn is the seat of an evangelical archbishop. Every five years a big song festival with more than 20,000 participants takes place in the city. The dominant industrial sectors are shipbuilding and mechanical engineering, electrical engineering, textile, paper, chemical, pharmaceutical and food industries, as well as the printing industry. Tallinn is an important transport hub with a fishing port and the new deep sea port of Muuga. The city port mainly serves the ferry traffic to several Baltic Sea ports. The international airport is in the east, the seaside resort Pirita in the northeast of the city.

After the severe destruction in World War II, the streets of Tallinn were reconstructed based on an 18th century building survey. Toomberg, with its fortifications from the 13th century and the cathedral church (13th-15th centuries), is situated above the city. In the fortified old town there are several medieval churches and the town hall (14th / 15th century) as well as the magnificent house of the Blackheads (15th / 16th century). In front of the city is the former Katharinental Castle, which was built for PETER I, the Great in 1718–1723 and is now a museum.

The German city that arose next to the Estonian settlement Lindanise was granted Luebian law in 1230, joined the Hanseatic League in 1285 and belonged to the Teutonic Order since 1346. In 1561 Tallinn and Estonia became part of Sweden, and in 1710 to Russia.

The reform process that began after independence in 1991 and initially ran with great difficulty is almost complete, with privatization and the necessary structural change completed. The gross domestic product has been growing since the mid-1990’s. However, Estonia is dependent on the import of foreign exchange fuels, such as oil and natural gas, and electrical energy, especially from Russia.

A still important branch of the economy is agriculture with the cultivation of potatoes, fodder plants, grain, flax as well as with dairy cattle, pigs, sheep and poultry. The food industry accounts for a third of industrial production in terms of value. Deep-sea fishing is mainly carried out off the West African coast and only a quarter in the Baltic Sea.

The phosphorites extracted from Tallinn are used to manufacture fertilizers. The most important indigenous energy source is the mighty oil shale deposits in the northeast. More than 90% of the output is used to generate electricity. Other own energy sources are wood and peat. The cotton industry emerged from old textile factories in Narva and Tallinn. Important branches are also the construction of electrical, radio and, above all, electronic systems, mechanical engineering and shipbuilding as well as the emerging wood processing and paper industry. The main trading partners are Finland, Sweden, Germany and Russia.

Estonia has a dense road and rail network. 80% of Estonia’s foreign trade goes through the high sea port of Tallinn, and there is also the high sea port of Paldiski. The most important tourist attractions are the picturesque old town of Tallinn and especially the bathing and health resorts Pärnu and Haapsalu on the Baltic Sea coast and Kuressaare on the island of Saaremaa.

The present-day area of ​​Estonia only became statehood after the First World War. In 1920 Estonia adopted a democratic constitution after the Red Army was driven out. In June 1940, Soviet troops occupied the country, which in August was incorporated into the USSR as the Estonian SSR. On August 20, 1991, Estonia declared its independence and in 1994 joined NATO’s “Partnership for Peace” program. Estonia has been a member of the European Union since 2004.