Switzerland today, or the Swiss Confederation, is undoubtedly one of the most peaceful countries in the world, but the same was not the case in previous times, since it had to do with struggles, wars, massacres and dramatic events of all kinds.

The causes of all this were essentially three:
– the position of center between all the European powers that in the Middle Ages often dragged it into their affairs;
– its subdivision into “cantons”, that is, small statues, inhabited by people different by stump and religion;
– the Protestant Reformation which divided Switzerland into two parts, as indeed in all other regions of the world.

But already since 58 to 50 BC, Switzerland had to deal with wars and invasions by the Romans of Caesar who occupied western Europe. Caesar subjected the Celtic tribes of the Helvetii, from which the territory took the name of Elvezia, and this became a Roman province. Such remained for two centuries. Then, after the Roman occupation, which also brought advantages, the invasions of the Burgundians and the Alamanni arrived and sowed destruction everywhere. And this lasted until 536 when Switzerland was conquered by the Franks and until 770 it was part of the empire of Charlemagne. During this period prosperity returned to Switzerland; the first feudal concessions took place and the spread of Christianity began.

On the death of Charlemagne, which took place in 814, the local lords, each at the head of a fiefdom, fought between them and the cities they owned became free and autonomous: among them Bern which then became the capital of the state.

After several internal fights many lords disappeared from the scene until, at the end of XIII century only two families remained to contend for supremacy. They were the Habsburgs, Austrians, and the Savoys, Italians. And in the end the Habsburgs got the better of it.

At that point, the communities that remained free began to worry, especially the three cantons of Uri, Schwyz and Unterwalden, located around Lake Lucerne. These three cantons, with the intent to defend each other against possible enemy attacks, formed a confederation on 1 August 1291 making the pact, which went down in history as the “Pact of the Rutli”. And since this pact was considered as the foundation stone of the future Confederation, August 1st is still considered a national holiday. And as a result of this pact all the Swiss peoples joined together and began to fight against the Austrians with the clear intention of recovering their independence. The famous legend of the archer William Tell dates back to that period and, for having rebelled against the governor of the canton of Uri,

Immediately after the signing of the Rutli pact, a bitter war began between the Swiss peasants and mountaineers against the Austrians who, in the battle of Morgarten on 15 November 1315, were massacred and forced to leave the country free.

Following this event, from 1332 to 1353, the other three cantons were joined by another 5: Lucerne, Zurich, Glarus, Zug and Bern. All armies were reunited and when the Austrians returned to office they were again defeated on two occasions, in the battle of Sempach in 1386 and that of Glarus in 1388. After these victories, the industrious Swiss citizens rolled up their sleeves and in a short time they could again count on great prosperity.

This led to 1476 when the ambitious Duke of Burgundy, Charles the Fearless, wishing to build a kingdom that went from the English Channel to Italy, tried to occupy Switzerland. Once again the Swiss defeated the enemy armies in the battle of Bern and then in that of Nancy and even killed the duke.

After a few more years, another 5 cantons entered to strengthen the Confederation and Switzerland became a very powerful and respected state. Not only that, he also became aggressive. In fact, in 1512 a powerful army descended to Italy, conquered Novara and Milan. In the latter they settled Massimiliano Sforza and then went to Genoa.

Having reached its maximum power, the Helvetic Confederation, however, experienced a setback because on 13 and 14 September 1515 in Melegnano, near Milan, it was defeated by the French troops of Francesco I, also equipped with artillery.

In the early years of the In the 16th century an event contributed to dividing the Confederation in two: the Protestant Reformation. In 1519 Protestantism Ulrico Zwingli began to spread and after him Giovanni Calvino. A fierce hatred divided the cantons that remained Catholic from those that became Protestant, until the civil war was reached: it was 1529. This situation lasted for about two centuries, until the populations finally understood that each canton could profess the religion it wanted without, however, obliging others to give up on them. And so, calm returned, work also returned and with it wealth. See Countryaah for population and country facts about Switzerland.

The Swiss plateau is the most densely populated area in the country thanks to its natural geographic favor. Three quarters of all Swiss live here. The Jura is much less populated. In fact, only 15% of the population live in the Alpine region, most of the country. Here, however, the almost deserted mountain areas contrast with the relatively densely populated larger valleys with a comparatively small extent. Many mountain farmers have given up alpine farming and have emigrated or are trying to make a living in tourism.

More than two thirds of all residents live in the cities of Switzerland. Half of them live in urban agglomerations with more than 80,000 residents: Zurich, Geneva, Basel, Bern, Lausanne, Winterthur and St. Gallen. 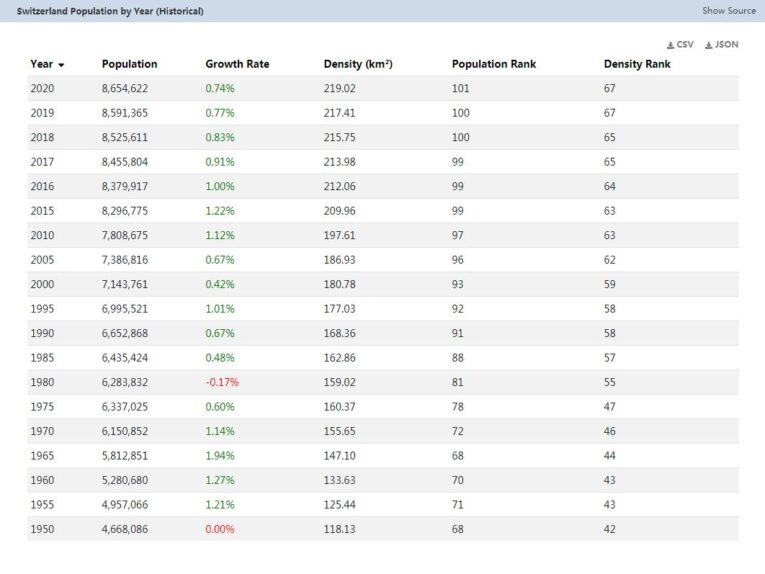 And here comes an important character on the historical scene of Europe: Napoleon Bonaparte. He was convinced that it would have been of great use for France to conquer the Confederation and on January 28, 1798 he sent an army; completed the occupation he proclaimed the Helvetic Republic, subject to France. Then he granted a new constitution which, however, ensured Switzerland at least a decade of peace.

After Napoleon’s fall, the cantons became 22 and they remained forever. 25 could be considered because three of them also include two little statues.

In 1815, a “federal pact” was drawn up in Zurich which restored Switzerland to the form of an independent and neutral confederation of sovereign states.

In 1848 a new constitution was promulgated whereby the confederation of states became a federal state with the capital Bern. In 1874 and 1891 some changes were made to the Constitution.

During both world wars, Switzerland always maintained its neutrality and constantly worked to welcome and assist thousands of persecuted, wounded, prisoners and missing, all under the auspices of the Red Cross, a symbol of freedom and civilization and respect for human rights, of Swiss institution.

However, in 1938, he still reiterated his neutrality and all states declared themselves ready to respect it. Despite this, Switzerland completed some fortification works so that at the first signs of danger it could attest to its army, already ready and trained, at a point where it was easier to defend its territory.