The first inhabitants of the region, from the Danubian plains, were the Slovenes, who created the historical territory of Slovenia, a mountainous region of northwestern Yugoslavia. They had been slaves of the Avars and had fled from Italy to the passage of the Lombards. They moved west and went up the Sava valley and as their migration progressed, they escaped the yokes of the Avars, but entered the sphere of influence of the Germanic peoples. And so they stayed until 1918.

Already in VII century were under the dominion of a Frankish king, Samo, who reunited them under an independent kingdom, which remained standing even after his death.

Then they were subdued by the Bavari and the Magyars and then again, by theXI to XIII century, they were dominated by minor German lords, including the Andechs-Merano, the counts of Gorizia, the Patriarchate of Aquileia and the Babemberg who established themselves more in the central-northern territories.

Then they extended their influence also in the southern territories which, passing to the Crown of the Habsburgs, decreed the automatic passage of the Slovenes to the House of Austria. And with the historical phases of this house the history of the Slovenian people proceeded.

In 1521 Charles V divided the empire and the Slovenian regions followed the fortunes of internal Austria with the center of Graz. From 1783 to 1809 they were under the direct administration of the Vienna Chancellery.

From 1809 to 1813 they were under the rule of Napoleon of the “Illyrian Provinces” based in Ljubljana. In 1814 they returned to Austria, under the reign of Illyria, and so on until 1849.

The Slovenian people, made up exclusively of peasants, without middle or high classes, never had any participation in the ups and downs of all the changes of ownership they underwent. Only around 1848 did the first small signs of a reawakening of national consciousness begin to appear. But it was only in the literary field and they stayed there, despite the requests from the external environment. And all this because the people, ignorant and ignorant, were convinced that their interest was only to be led by a powerful emperor of Austria. The same passive attitude was also followed by some Slovenian deputies to the Austrian Parliament in 1917. And these, on May 30, 1917, officially declared, through Antonio Korosec, their spokesman,

With the end of the First World War, however, Slovenes and Croats joined the Serbian state of Yugoslavia, under the scepter of the Karagjorgjevic.

No noteworthy event occurred over the years that passed until the outbreak of the Second World War, when this country too was involved in the German conquests and Yugoslavia suffered a disintegration in a short time.

And so in 1941 Slovenia was divided into two parts: the northern one, richer in industries and mines, was annexed to Germany, which divided its territory between Styria and Carinthia; the southern one, as a province of Ljubljana, was annexed to Italy and this was mainly agricultural and wooded. And here a high commissioner was put in charge of power, assisted by a council. The Slovenian character of the populations was taken into account by maintaining their living standards. See Countryaah for population and country facts about Slovenia. Schools continued to teach Slovenian while official records were also written in Italian. Military service was not made mandatory. The first High Commissioner in the area was Emilio Grazioli, former Federal of Trieste.

Slovenia has the most uniform population of the countries in Southeast Europe. Most of the residents are Slovenes. The largest minorities are the Croats, Serbs and Bosniaks. Although the Slovenes belong to the Slavic peoples, they have been culturally oriented towards Central Europe since the Middle Ages, as the country once belonged to France and was later annexed by Austria.

The country’s population is quite unevenly distributed. It is concentrated in the valleys of the Save, which are often widened like basins, here especially in the basins of Ljubljana, Drava and Mur. 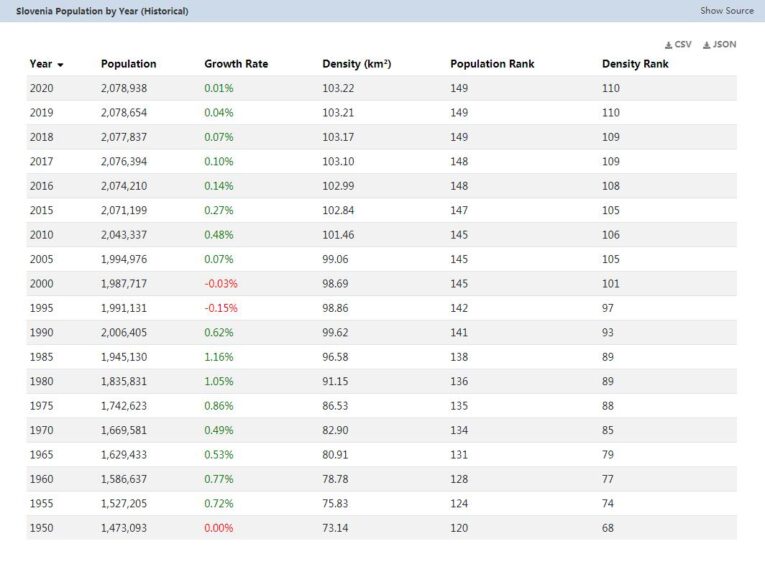 In this part many Slovenians converged attracted mainly by the freedom of language and administrative that was granted, in addition to a certain autonomy. While in the German part two new provinces had arisen: that was southern Styria and southern Carinthia, where a process of complete Germanization was started.

But when the Soviet Union entered the war, a resistance movement, the Liberation Front, was created in Slovenia against the invaders by the communists. Many Slovenians were not in favor of the resistance, preferring the occupiers to the communists. So many of them, especially Catholics, ended up in the famous “foibe”, that is deep holes dug in the ground, slaughtered by their own countrymen.

In Ljubljana there was the General Command of the 2nd Italian Army, from here all military and political directives left up to Montenegro. These failed to eradicate the Liberation Front, but did not even increase the number of sympathizers who, after September 8, 1943, when Italy signed the separate armistice with the Allies, found themselves without guidance and without defense, totally in the hands of the Germans. And these, with their cruel and violent methods, made it clear to the Slovenes that resistance would be their only way of salvation. Many strata of the population left the territory to join the Yugoslav resistance. They were Tito’s best collaborators. The collaborators instead fled part in Austria and part in Italy.

After the victory, in May 1945, with the regained freedom a federal organization was re-established.

The first noteworthy event in the modest history of the Slovenian people was the Constituent Assembly of 30 November 1946. With it the Statute was modeled on that of the other six Yugoslav federal republics. All the pre-war territories returned to Slovenia, where the serious and hard-working population continued to work for industrial progress and development. Marburg was one of the most important centers, also for the construction of a large hydroelectric plant, created to exploit the waters of the Drava and provide electricity to the whole western region.

Alongside the industry, agriculture had a great development which made Slovenia the richest of the Yugoslav federal republics. Great importance for a series of hydroelectric plants took on the Maribor area. The same could not be said of the Karst region.

And with the placement of Yugoslav Federalism, it came to the threshold of the eighties when in Slovenia the Communists themselves began to cultivate ideas and feelings different from the federative ones, with the intent to revive the Slovenian economy which, as rich as it was, was vegetating in a stall position. Furthermore, the population identified more in the Austro-Germanic character than in the Balkan one, so requests for central government for political liberalization began. And for this, parties such as the Slovenian Peasant League were born, which registered in 1988 as an association within the Socialist Alliance.
Still other organizations were born until in 1989 Parliament passed multi-party legislation. As we proceeded in this direction, the federalist sentiment that had hitherto animated the Slovenian people that now wanted to be independent was diminished.