The first peoples who inhabited the region were of different lineages but all Celts. After the first years of the Christian era, the Gemanians arrived, especially the Quadi, who settled on the banks of the upper and middle Danube. Then they joined the Marcomanni, also scattered between the Danube, the Main and the Rhine, and together they fought against Marc’Aurelio. It is known for certain that the Romans had created military bases in the Danubian area and had pushed their expeditions beyond Trencin, but with no intention of staying there. Therefore, after the Marcomannic wars, the Romans left the country and then the Germans returned, in the second half of the third century. In particular, it was the Gepids and the Goths.

These remained in the country for almost two centuries. Then in the fifth century came the Huns who drove out all the others; immediately after the abandonment of the Huns, repeated immigrations of Slavic lineages began, coming from Moravia and Bohemia. They shared the unity of language and culture.

Not long after their arrival, they were attacked and subdued by the Avars, and remained so until 623, when the Frankish king, Samo, came to free them. Thus they entered the orbit of the Frankish empire. Their Christianization began immediately, which was rapid given the ease of diffusion, due to the excellent communication route represented by the Danube.

The first Slavic gentleman who worked to bring together the various bloodlines was Pribina, around 820. But then he was ousted by Prince Mojmir, who wanted to annex Slovakia to the kingdom of Moravia. See Countryaah for population and country facts about Slovakia.

More than two thirds of the population are Slovaks who belong to the population group of the Western Slavs. Hungarian minorities only settle on the southern border of the country. Bilingual street signs and place names are often found in this area. Sinti and Roma form another, but very small, minority. Slovak as the country’s official language is very similar to Czech.

The population is distributed very differently in the country. The valleys and basin landscapes are extremely densely populated, while large parts of the mountains are sparsely populated or not populated at all.

Around 60% of the population live in the country’s cities as a result of ongoing rural exodus.

With increasing urbanization, population growth has also steadily decreased in Slovakia. Nowadays it is only 0.3%. 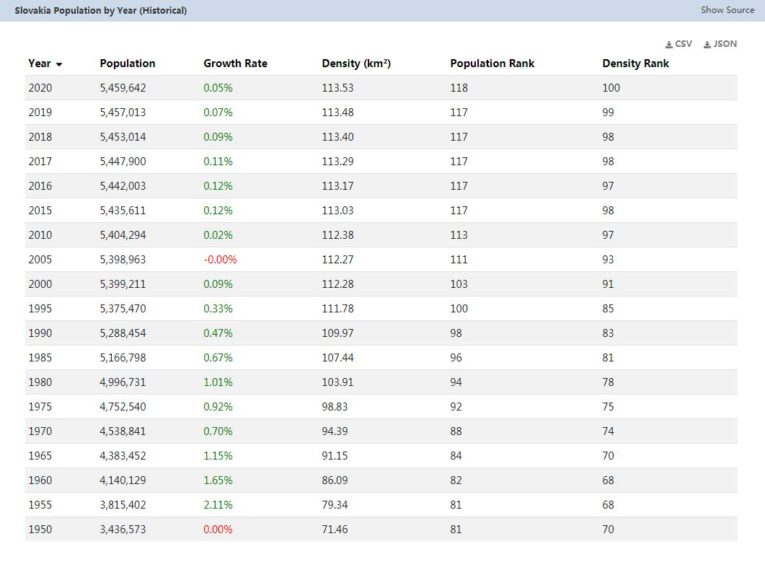 In the tenth century the Hungarians destroyed the Moravian kingdom and this event marked the future of Slovakia, because while Bohemia and Moravia, with the help of the Franks, resisted the Magyars, Slovakia failed to do so. It therefore fell under the power of Hungary and was definitively united to it until 1918. The historical-political events of the country inevitably identified with the historical ones of Hungary.

But above all in the ethnographic field there were repeated changes. By 1242, following the Tatars’ incursions, the region had gradually become depopulated until the new inhabitants arrived from Germany and Austria, who practiced an active colonization. With their alacrity, the conditions of the region improved in all sectors: they developed agriculture, mining and commercial and cultural relations.

Gradually the Slovaks summed up their numerical majority but only in relation to the lower working classes, since the bourgeoisie was essentially German and the church and aristocracy were Magyar. Thanks to the settlers, many new towns and villages sprang up throughout Slovakia. Then significant changes in the countries were made when together with Bohemia they were all united under one lord, who was Sigismund of Luxembourg, between the fourteenth and fifteenth centuries. Then, in Slovakia, the Czechs came from Bohemia and their presence, their culture, awakened the Slovak national conscience. The Czech language was adopted in both correspondence and literature. The Slovaks strengthened their contacts with Bohemia because, being this together with Hungary governed by a single sovereign, in a sense they also felt united. And to intensify these contacts came the Reformation of Luther and Calvin. Given that in Hungary, and consequently also in Slovakia, there was freedom of religion, the Bohemians were able to settle there without fear of being persecuted.

And there was still another reason in the 16th and 17th centuries, when Hungary was occupied by the Turks. But at the beginning of the 19th century in Slovakia the national conscience really began to awaken. All their national movements walked along with the Czech ones, with whom, for some time now, they had constituted a single “Czechoslovakian” unit, which was becoming increasingly complete.

For this reason, in 1849 the Slovaks asked Austria for the separation from Hungary and the formation of a particular “land of the Crown”, to be formed also with the Carpathian Ruthenians, and submitted directly to the emperor. Instead they obtained only the formation of two “administrative districts”, separated and submitted to the imperial governor of Budapest.

In 1861 Austria was once again asked to create an autonomous Slovak province. And even on this occasion only three Slovak gymnasts were obtained.

A passive struggle against their dependence on the Magyars began in 1884 and in 1901 the active one began, starting an open journalistic campaign. There was no success there, but this all came later, when together with the Czechs they formed the Czechoslovak legions that participated in the First World War. Before, however, a pact had been stipulated in Pittsburg, United States, on May 30, 1918, which provided for the formation of a unitary Czechoslovak state at the end of the war. And with a resolution of the National Assembly, the Czechoslovakian state was created on October 30, 1918.

And this first Republic continued on its path until it arrived in 1938. The Slovaks had founded an autonomist party, whose head was the priest Andrej Hlinka, who opposed Prague for several reasons. While acknowledging to the government the merits deriving from the school, health and construction activities profuse in the country, the excessive presence of “Czech” officials in the state, at the expense of the Slovak ones, and also the threats of the anti-clerics to the “Christian base Slovak. Not to mention the foreign policy which, being conducted mainly by leftist elements, would have decreed the safe collapse of the nation.

And since the extreme fringes of the autonomist party ended up prevailing, they also became easy prey for Hitler’s Germany, which through them perpetrated the destruction of Czechoslovakia.

In March 1939 numerous Slovak-German associations were born with the specific task of achieving separatism. And when the Czechoslovak republic finally understood the intentions of the Slovak separatists, imprisoning the most prominent ones such as Bela Tuka and Sano Mach, it only accelerated its disintegration process, long prepared by Hitler.

After 4 days the Slovak Diet met secretly and proclaimed the independence of the Slovak state whose government was made up of Monsignor Tiso, the main proponent of the new team. The various ministers were appointed, after which Monsignor Tiso sent Hitler a message declaring the independence of the Slovak nation from the “Czech yoke”, showing that he was ready, with the whole country in agreement, for friendship and collaboration. On March 23rd, Hitler took the young government under his protective wing and with this he arrogated the right to preside over the strategic points of the region with his armed forces.

Variations in the territorial conformation were necessary; in fact, a belt located on the border with Rutenia Subcarpatica was sold to Hungary while on 21 November 1939 it obtained, with a German-Slovak agreement, the revision of its borders with Poland, gaining 586 square kilometers. Bratislava, the capital, by virtue of all the variations made, came to be within easy reach of both the Germanic and Hungarian borders.