Once called Dacia. In 101 after Christ a large army, commanded by the valiant general Trajan, set out to perform the “Operation Dacia”, that is, the conquest. And this conquest was more a political operation than a military one, since Dacia, being a border region, served in Rome to establish a strength that prevented the invasions of the barbarians.

For the operation there were two times, as indeed happened in all the wars completed by Rome. The first was that of the conquest of the region with consequent subjugation of the barbarians; the second was that of sending numerous Roman colonists to the area. And after 5 years of war, Dacia was another Roman province.

Relations between the Dacians and the Romans were immediately good and the region was called “Dacia felix”. After 150 years of tranquility, however, the barbarians arrived in huge quantities; they flowed unabated and in 274 the Roman army left Dacia and settled outside its frontier. And for hundreds of years Goths, Gepids, Huns and Avars lorded over what had been a happy land, destroying and plundering.

But the imprint that Rome had given could not be completely erased and even Latin expressions remained in the language which are still part of Romania’s idiom.

In the 6th century after Christ, numerous Slavic tribes occupied two areas of Dacia: Transylvania and Wallachia. The Slavs merged with the Dacian-Roman population, giving rise to the current population. See Countryaah for population and country facts about Romania. 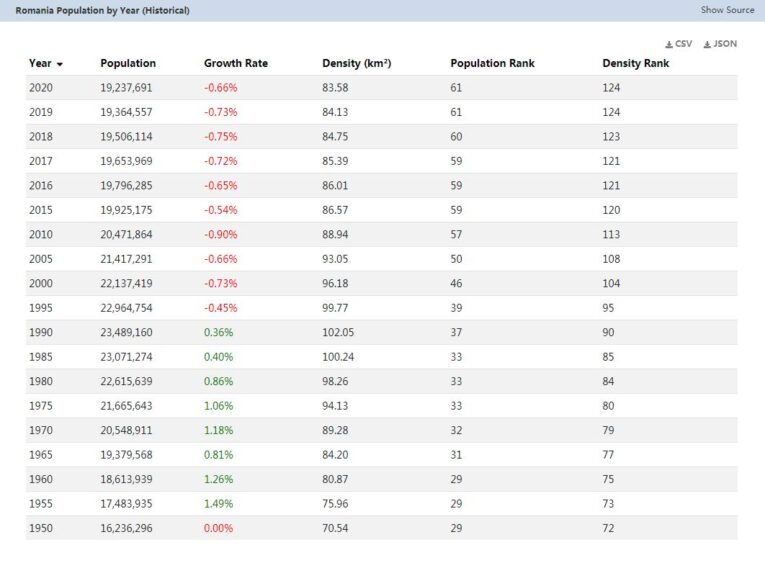 Centuries passed but Dacia, given its position as a bridge between the west and the east, could not constitute an independent state and hordes of barbarians continually passed through this land destroying and plundering. Then, however, slowly the Dacians began to ally with each other and to oppose the invaders, commanded by a “Voivoda”, that is a prince. And finally, in 1200 two important principalities were established: Wallachia and Moldavia, which returned their territories and peace to the Dacians. But it didn’t last long since the Turks arrived.

The “voivodas” fought valiantly against the armies of the sultans but everything was useless; a great figure of leader emerged in the battle of Racova on 10 January 1475, that of Prince Stephen the Great, who with only 40,000 men defeated the mighty Turkish army made up of 100,000 soldiers.

The Turks occupied the region until the end of 1600. During these dark years the Dacians began to call their land “Romania”, no longer Dacia, or “Land of the Romans” and this also to confirm their loyalty to the West against the Turkish oppressor.

At the beginning of the 1700s the Ottoman Empire began to creak under the blows inflicted by another emerging power: Austria, to which the Turks, with the Treaty of Passarovitz of 1718, had to yield some Romanian regions.

Then the Russians arrived and so the Romanians found themselves divided into three masters. From 1821 to 1848 numerous people’s revolts occurred but all to no avail. Until in 1856 at the Congress of Paris, Napoleon III, emperor of the French, and the great Italian statesman Camillo Benso count of Cavour, made the proposal to rebuild an independent Romanian state. And in fact in 1858 the great powers re-founded the two principalities of Wallachia and Moldavia.

The Romanians in 1859 elected Alexander Cuza as the only prince of Wallachia and Moldova and after two years the principalities met in the “Kingdom of Romania”, and Alexander Cuza was its king.

In the First World War, Romania joined the Allies and, with the achievement of victory, Transylvania, taken from Hungary, and Bucovina, taken from Russia, joined the kingdom.

In 1940 Germany, led by the dictator A. Hitler, made its conquests in the heart of Europe, also involving Romania. When it declared neutral during the Second World War, it was forced to return:
– Bessarabia and part of Bucovina to Russia;
– southern Dobruja to Bulgaria;
– part of Transylvania to Hungary.

These events caused serious unrest within the country. General Antonescu, head of the pro-Nazi movement of the “Iron Guards”, took advantage of this to seize power. He broke neutrality and joined Hitler in the war. But with the defeat he was forced to ask for peace from Russia on August 23, 1944. After a period of Soviet military occupation, Romania became a People’s Republic, ruled by a government of communist ideology.

Head of the communist government was Petre Groza, supported by Moscow. And this had not been agreed in the treaty of Yalta of February 12, 1945, which took place between the leaders of the three great allied powers. On that occasion, the agreements provided for the formation of democratic governments for Bulgaria and Romania.

The matter was debated in an Anglo-Russian-American conference in Moscow in December 1945, until a compromise was reached in the following January 1946, which also decreed in the government of Groza the presence of a representation of national-peasants and liberals.

But the problem was definitively solved by the elections of 19 November 1946 as the population voted compactly for the communist government block.

On February 10, 1947 in Paris the peace treaty was also signed by Romania to which northern Transylvania returned permanently.

At the same time the Inter-Allied Control Commission ceased its activity and then Romania became a real Soviet satellite state. Agreements were signed with the Soviets which gradually absorbed the whole Romanian economy.
Furthermore, the conditions of peace provided for the presence of Soviet troops in Romanian territory, until the conclusion of the treaty with Austria for the communication routes, which had not yet occurred.

Slowly, Romania naturally found itself included in the Eastern European bloc, which then became stronger with the twenty-year mutual assistance agreements signed in 1948 with Bulgaria, Hungary and the Soviet Union.

The internal regime became completely sovietized, so much so that in March 1948 the elections were a single governmental list with the adoption of a Constitution of the popular type already in force in the other bloc countries, including Yugoslavia. Strict economic agreements followed and the whole economy of the country was slowly nationalized. Dictator of this state was Anna Pauker.

When the crisis between Yugoslavia and the Soviet Union broke out in the same year (1948), Romania was the one that suffered the greatest consequences. In fact, greater regime controls led to purges and, following the border incidents of 1951, diplomatic relations with Tito were broken.

In 1952, with the emergence of economic difficulties, other purges were started. An illustrious victim was Anna Pauker, together with her collaborators, while power came into the hands of G. Gheorghiu-Dej, whose centrist position in the government was strengthened, especially after Stalin’s death. In 1955 Romania signed the Warsaw Pact and joined the United Nations.

In 1957 the difficulties with Yugoslavia were smoothed out and the Soviet leader Khrushchev himself met with Tito, with whom Romania established the agreements for navigation on the Danube, which had previously remained unsolved.

When the revolution broke out in Hungary, the repercussions were felt also in Transylvania, residence of Magyar minorities. Following this event, Khrushchev ordered the evacuation of that state in 1958 and then officially declared that by 1960 Soviet troops would also leave Romania.

As soon as this period of relaxation began, Romania also sought friendly contacts with other countries including Greece and Turkey, with which it proposed a non-aggression and denuclearization pact for their regions.

And so, in the following years, the desire for independence of the people and their leaders gradually developed. There was talk of “socialist patriotism” and ever closer ties were established with the West, for example with Italy and the United States, with “heretical” communist countries, such as China and Yugoslavia and finally with those of the so-called Third World, such as India and Indonesia.

Romania’s independence policy continued even after the death of Gheorghiu-Dej and with the advent of Ceausescu who always tried to strengthen the autonomy of the country.