Latvia is one of the successor states of the Soviet Union and belongs to the three so-called Baltic states. The country lies between Estonia in the north, Belarus and Lithuania in the south and Russia in the east.

Almost a third of the population lives in the capital Riga on the Riga Bay of the Baltic Sea, which, in addition to Latvians, includes Russians, Belarusians and Poles.

End moraines with numerous lakes determine the landscape. The most important branches of industry are mechanical engineering and vehicle construction, as well as the chemical, pharmaceutical and textile industries. 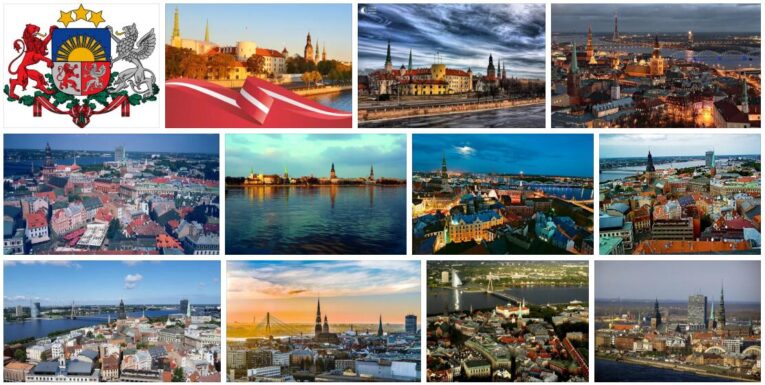 Abbreviated as LV by ABBREVIATIONFINDER, Latvia is located in the north-west of the glacial molded Eastern European lowlands.

In addition to ground moraines, elongated terminal moraines with domed heights and numerous lakes in between determine the image of the Latvian landscape. On the Kurland peninsula in the west, wide glacial meltwater valleys run through the up to 184 m high Kurland heights.

To the east, flat regions join in the center of the country. These relatively densely populated areas, consisting of fertile ground moraine plates and sand areas, extend from the flat Riga Bay, which extends deep into the country, to the border with Lithuania.

East of the Daugava, the largest navigable river in the country in the lower reaches, extends the southern part of the historical landscape of Livonia. The terminal moraine of the Livonian Heights is the highest in the country at just over 300 m. To the east of it, on the Russian border, lies the largely marshy and lake-rich Eastern Latvian Depression. A 10 to 40 km wide coastal plain stretches along the poorly indented Baltic Sea coast.

Latvia has a dense network of waterways.

The climate is influenced by the ocean, with relatively mild winters and cool summers. The mean annual precipitation on the coast and in the lowlands is between 550 and 600 mm, in the terminal moraine areas between 700 and 800 mm (Fig. 2). Latvia is relatively richly forested. The largest contiguous pine and spruce forests are on the Kurland peninsula. The lowlands are largely covered by deciduous forests, which mainly consist of birch and alder. The lowlands, which used to be mostly marshland, have been largely drained and turned into grassland. Nevertheless, around 5% of the country’s area is still covered by moors and swamps.

The capital of Latvia is located in the Riga Bay at the mouth of the Daugava and Baltic Sea.

The city has around 703,000 residents. It is the seat of a Catholic and a Protestant archbishop, has a university, a technical college and five other universities, several theaters, museums and a philharmonic orchestra. In addition to being the political and cultural center of Latvia, industry plays an important role not only in the city’s economy, but also in the whole country. Companies in the textile, food and wood industries, machine and vehicle construction as well as the chemical and graphic industries dominate. Riga has a sea and fishing port and an international airport.

The old town on the right of the Daugava, which was badly damaged in the Second World War, was largely rebuilt and is now a UNESCO World Heritage Site. The architectural features include the cathedral or Marienkirche, a brick building from the 13th century, the St. Peter’s Church rebuilt in the 15th century, the Renaissance-style house of the Blackheads from 1330 and the Teutonic Order’s castle, which has been redesigned several times. There are also churches and city palaces from the baroque era. Striking buildings from the more recent times are the cable-stayed bridge “Große Harfe” over the Düna and the 368 m high television tower on the left side of the Dünaufer.

Riga was founded in 1201 by German merchants and soon assumed a significant role in trade with Russia and Lithuania.

In 1282 the city joined the Hanseatic League. After the fall of the Livonian religious state in the 16th century, Riga became a free imperial city. It has been the capital of Latvia since 1918.

Latvia’s economy is in an advanced phase of transition from a socialist planned economy to a free market economy. The main problems result from the dependence on Russian fuel supplies and the traditional interdependence with Russian industry. Nevertheless, in the medium term, Latvia is ascribed good opportunities that make it likely that it will be accepted into the EU soon (Fig. 4).

The focus of agriculture, which has not yet been fully privatized, is the dairy industry and pig breeding. Mainly forage crops, grain, potatoes, flax and sugar beet are grown. Fruit and vegetable growing is of increasing importance.

Wood and wood products are the country’s most important export goods. After the modernization of the fishing fleet, the importance of deep-sea fishing is also growing.

Apart from peat, which is used as fuel by private households, limestone, clay and sands, Latvia has no mineral resources. The level of development in the manufacturing industry is still relatively high. The most important branches of industry are agricultural machinery, diesel and electric motors and electrical equipment and vehicle construction. There are also companies in the traditional furniture, paper, food and leather industries as well as the textile industry. Besides Riga, the most important industrial centers are Daugavpils and
Latvia’s main trading partners are Russia, Germany, Finland, Sweden and the Baltic neighbors.

Tourist attractions are the medieval old town of Riga, the beaches of the Baltic Sea and the charming lake and moor landscapes. Latvia has a relatively good transport infrastructure. Inland navigation is only possible 90 to 140 days a year. Especially the lower reaches of the Daugava and the Kurländischer Aa are used as waterways. By far the most important sea port is Ventspils (Windau), where mainly Russian crude oil as well as grain and general cargo are handled, followed by Riga and Liepāja. International airports are near Riga and Jelgava.

Latvia became an independent republic for the first time in 1918. The state existed until the occupation by the Soviet Union in 1940. The Latvian SSR declared its independence on May 4, 1990, which came into force on August 21, 1991. Latvia has been a member of the European Union since 2004.