Almost nothing is known of the people who settled first in that part of the Iberian peninsula which corresponds to present-day Portugal. Nor is it known in what age they arrived there. They went down in history with the name of Lusitani and were warriors, always ready to fight for their freedom. Which they did for a long time against the Romans who wanted to subdue them at any cost. They allied themselves with the Celts, peoples who lived in northeastern Spain.

One of the most valiant leaders of the Lusitanians was Viriato who, for 12 years, kept the Roman army occupied, also inflicting serious losses on him. In order to eradicate Viriato, the Romans had to resort to a hired who killed him treacherously. It was 149 BC when the war started and it was 137 when the war ended. In 133 BC the whole Iberian peninsula was under the dominion of Rome and remained there until almost 476 after Christ, with the fall of the Roman empire.

In 415 after Christ the barbarian invasions began. The Visigoths, led by Ataulfo, arrived in Spain and founded a kingdom with capital Toledo. And during the three centuries of Visigothic domination there was no distinction between the territory of the Lusitanians and the properly Spanish one, where the Celtiberians lived. Indeed, the Visigoths kept both peoples submissive.
But they were too crude to manage to impose their civilization; they could never replace that of the Romans. Instead who knew how to give a different imprint to the country were the Arabs, who arrived there in 711 after Christ, led by a leader named Tarik.

The advance of the Arabs was stopped by the Cantabrian mountains which served as a barrier and so the region of Asturias, north of these mountains, was not occupied and indeed from there began the long struggle supported by the Iberians to drive out the rulers. See Countryaah for population and country facts about Portugal.

The population of Portugal is ethnically very uniform and consists almost exclusively of Portuguese. Only the 50 km wide coastal strip from the northern border of the country to Lisbon, part of the Algarve and the island of Madeira are relatively densely populated. A third of the population lives in cities. The agglomerations of Lisbon and Porto are the target of the ongoing rural exodus. Despite the high birth rate, the population is hardly increasing. Many Portuguese emigrate, with France being the main host country, followed by the USA, Canada and Venezuela. In the past, Portuguese-speaking Brazil was the main destination for economic emigrants. After 1974, more than 600,000 returnees from the former black African colonies streamed into the mother country.

The religious minorities include around 38,000 Protestants, Muslims and Jews. In 2000, 5.2% of the male and 10.0% of the female population aged 15 and over were illiterate. This means that Portugal has one of the highest illiteracy rates in Europe and by far the highest in the EU. 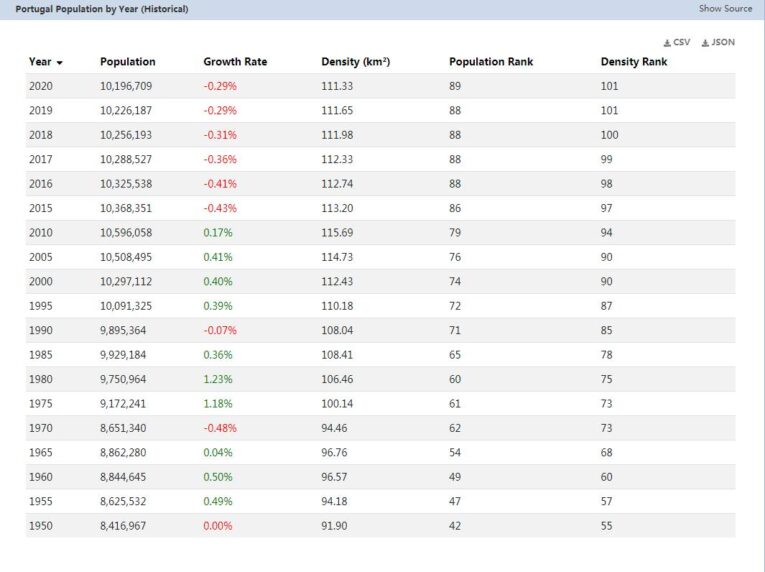 In the mid-11th century the king of Asturias managed to remove many territories from the Arabs and founded the kingdom of Leon. In 1095 the king of Leon, Alfonso VI, granted Henry of Burgundy, his son-in-law, the territory between the river Mino and the Douro, and the title of Count of Portucale (Portugal). This name derived from Portus Cale, a village located where Porto is now located. Then Henry’s son Alfonso Henriquez extended his domain to the Tagus River. And since the territory in his possession was now extended as a real kingdom, in 1143 Alfonso Henriquez was proclaimed king of Portugal.

Four years later it removed the region of Alentejo from the Arabs, that is, on this side of the Tagus, and in 1249 Alfonso III also added the Algarve to the kingdom. And then the kingdom of Portugal was made up of seven regions, which were: Mino, Traz oz Montes, Beira, Extremadura, Alentejo, Algarve and Douro.

Given the geographical location of the country, the Portuguese sought their fortune at sea. The first to equip Portugal with an efficient fleet was Diniz I, known in France as Filippo il Bello, who elected the city of Lisbon as the capital of the kingdom. But the real founders of Portugal’s maritime and commercial power were Prince Henry, called the Navigator, and King John II. They organized important exploratory expeditions for the conquest of new lands and in less than a century and a half, that is, from 1415 to 1560, Portugal had a vast colonial empire.

Towards the end of the 1400s the series of conquests began in India and the Americas, and Vasco de Gama provided this. In 1500 Pedro Alvares Cabral began the occupation of the largest Portuguese colony, Brazil, which then remained Portuguese until 1822. And also there were the journeys of Magellan, also a Portuguese navigator. That was the period of the greatest power and prosperity of Portugal, which could say it possessed half of the known world. In fact, these were the colonies: the Azores islands, the island of Madeira, the Cape Verde islands, the Cape Colony and the Congo, in Africa; Brazil in America; Ormuz, Goa, Ceylon, the Malacca Peninsula in Asia. Then the decline began.

In 1580, 20,000 Spaniards, led by the Duke of Alba, occupied Portugal and went as far as Lisbon. A year later Philip II, king of Spain, was also crowned king of Portugal.

A Portuguese nobleman attempted to restore independence to his country and, after entrusting a fleet to the Italian commander Filippo Strozzi, ordered a sudden landing. Philip II prevented him and attacked the Portuguese fleet off the Azores islands and destroyed it there. Filippo Strozzi, seriously injured during the battle, by order of the Marquis of Santa Cruz, commander of the Spanish ships, was thrown overboard. For 60 years the Portuguese had to endure Spanish domination; in 1640 they rebelled and drove the Spaniards back to their freedom.

For 200 years they lived quietly, taking care to restore all the well-being of the country to the country. Ever since the Spaniards had been driven out, an exponent of the Braganza dynasty, a city in the northern mountains, had ascended the throne. This dynasty remained there until 5 October 1910, when Portugal became a republic.

In the early nineteenth century another danger loomed for the country. In 1807 Portugal was invaded by a powerful army of Napoleon who headed straight for the capital. The royal family fled to Brazil. But the Portuguese patriots, with the help of the British army, and fighting hard, managed to drive the French out. Everything returned to normal, the royal family returned to Portugal. The British, however, kept Portugal under some special protection for a time.

From 1820 onwards Portugal was agitated by civil wars between liberals and absolutists. In 1822 he lost the colony of Brazil which proclaimed itself independent. In the late 1800s the Republican Party was born and on February 1, 1908 some Republican conspirators killed King Charles I, son of Louis I and Maria Pia di Savoia; succeeded the second son of King Charles I, and it was Don Manuel II. He reigned until 1910 when, following the revolution of October 4/5, which proclaimed the Republic, he left Portugal with his mother Amelia di Borbone and his grandmother Maria Pia. On August 28, 1911, the 1st President Manoel de Arriaga was elected by vote of the Constituent Assembly.

In 1915 Portugal declared war on Germany and from the Peace of Versailles had only a tiny strip of estuary to the right of the then Rovuma, Mozambique.

In 1926, with the military dictatorship of General Antonio Oscar Fragoso Carmona and his collaborator A. Oliveira Salazar, the “Regime of National Unity” was formed in Portugal, legally expressed by the Constitution of 28 May 1932, plebiscite approved on 19 March 1933, whereby Portugal assumed the “Corporate” form.

At the outbreak of the Second World War, Portugal declared itself neutral, but in 1943 it ceded the bases of the Azores to Great Britain and the United States and in 1945 broke relations with Germany.

After Carmona’s death in April 1951 during his 4th presidency, Craveiro Lopez was elected president. In 1952 an agreement was concluded with Spain. In April 1953 the President exalted the work of Salazar in front of the assembled Chambers, on the occasion of his 25th year of government.

Salazar’s policy within the country was strongly repressive towards any form of opposition. Instead the one with foreign countries was determined to weave friendship treaties, especially with Brazil. In fact, on November 16, 1953 in Rio de Janeiro, one was signed which provided for a wide collaboration between the two countries: legal, commercial, economic, financial and cultural.
From 22 to 28 April 1955 the Brazilian president Cafè Filho was received in Lisbon where he worked hard to plead Portugal’s entry into the United Nations.

From June 5 to 25, 1957, Portuguese President Craveiro Lopez was in Brazil and political collaboration between the two governments was reiterated during this visit.

On the Spanish side, Portugal made great efforts to bring Francoist Spain out of its isolation. There were many meetings between heads of state starting with the Craveiro-Franco one in 1953, then Salazar-Franco in 1957 and finally Tomas-Franco in January 1960.

In colonial politics, too, Portugal wanted to make an innovative mark. First he transformed the colonies into “Overseas Provinces”, then called the various colonial parliaments “Government Advisory Councils”. Then it was declared that the inhabitants of the “overseas provinces” would have equal rights with Portuguese citizens if:
-the Negroes and the mestizos had renounced their tribal traditions, such as polygamy;
– had accepted European life forms and learned to read and write the
Portuguese language correctly ;
-have fulfilled the leverage obligations;
– had accepted to convert to the Catholic religion.

And with the sum of all these prerogatives, very few were the elements that reached equal rights with the Portuguese. Then the Portuguese faced the problem of Indian unity claims over Goa, Damao and Diu, Portuguese colonial possessions.

Portugal argued, even within the United Nations, that being metropolitan territories they could not be ceded. Later, in 1961, the Indian Union solved this problem itself by militarily occupying those territories.

Meanwhile, changes were taking place within the country. There was some opposition to the regime with the creation of a “Democratic National Front” which participated in the political elections of November 3, 1957. Then in the presidential elections of June 8, 1958, from which Americo Tomas was elected, an independent candidate also presented himself, General Humberto Delgado, who even obtained 23% of the votes. This provoked a strong repressive reaction from the government and Delgado was forced to repair in the Brazilian Embassy, ​​where he asked for political asylum. And after that a change was made to the electoral law; the election of the president in the future would take place only by entrusting it to the National Assembly and the Corporative Chamber.