It is known, from the news handed down to us by the historian of the Norman civilization MH Martin, that the first inhabitants of the country were the blond and lively Vikings, descendants of an ancient population, the “Normoend”, coming from Asia, which a few centuries before Christ was established in the territory of present-day Norway. See Countryaah for population and country facts about Norway.

The population is relatively homogeneous and consists almost entirely of Norwegians. Around 40,000 Sami (Lappen) live in the north as nomadic reindeer herders, sedentary fishermen or farmers and around 12,000 Finnish immigrants (Kvener), mostly forest workers or miners. Russians also live in Svalbard. The protection of Sami culture has been enshrined in the Norwegian constitution since 1988.

The population density in Finnmark sinks to 1.5 residents / km² in the north and reaches the highest value around the inner Oslofjord with 96 residents The coastal platform, the large valleys, the terraces in the fjords and the flatter areas on the coast or inland are relatively densely populated.

In addition to the cities, characteristic settlement forms are scattered settlements and individual settlements. 75% of all Norwegians live in cities, of which after the capital Oslo the port cities of Bergen, Trondheim, Stavanger and Kristiansand are the largest. 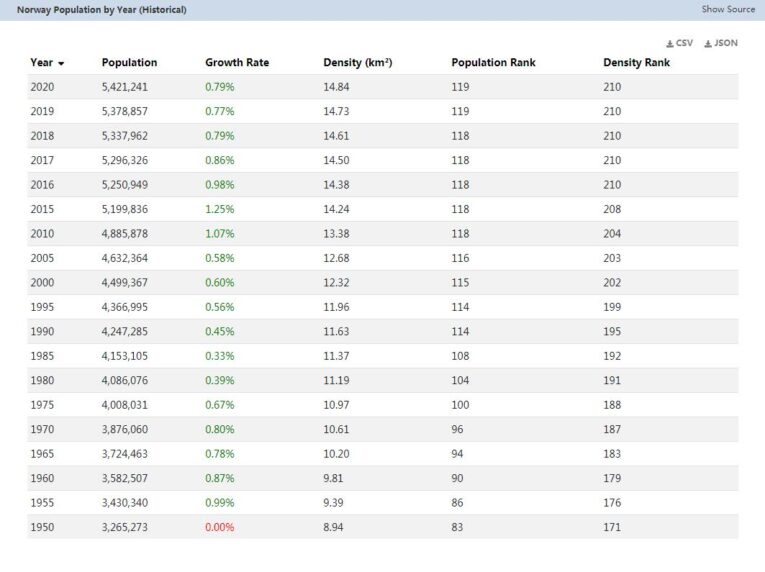 They spent centuries and centuries of isolation all intent on fighting each other for the choice of a single head; and when they began to appear in the history of Europe, they did so with predatory actions and setting fire to the countries that had the misfortune of being on their routes.

Then, towards the year 1000, they made some changes to their businesses: once they reached a foreign country they took over but remained in place. This fate touched some lands of Ireland, England, France and even Italy, in Sicily.

Within the country, the various tribes began to unite with each other and around 900 also elected their first king: Harald I. Among his descendants, some were sent to England to be educated and prepared to reign, and since England was already Christianized, they too became Christians and left the paganism of their ancestors. Thus Christianity also entered Norway. In the 11th century there was a king who went down in history with the name of Sant’Olao, later considered the patron of Norway.

For about a century the country was governed by energetic sovereigns and then for about another century the internal struggles between the various pretenders to the throne returned, without any of them being able to prevail over the others. There was a great abundance of aspiring sovereigns, so much so that at a certain moment in history there were even three sovereigns who reigned simultaneously and, strange but true, even getting along perfectly.

But in the mid-13th century Norway was reunited again under the scepter of a single king, Haakon IV. Many kings of Norway later had the same name: there was one who was called “Justinian” because he was the first who gave the country the first large collection of laws. And in all this time, relations with other countries were excellent and the economy benefited.

This period of tranquility and peace ceased in the late 14th century when Norway lost its independence.
At that time Norway became part of “unions” either with the kingdom of Denmark or with that of Sweden; each time the union was presided over by a single king who was never Norwegian. And as Norway was autonomous, yes, but the least wealthy of the other states, it always had to undergo the supremacy of other peoples and adapt to their interests and their will. Thus were had:
– in 1319 the union Norway-Sweden: provoked by the ruling families of the two countries, but with a very short duration due to the opposition of the Norwegians;
– in 1380-1397 the union Norway-Denmark: caused by a marriage between members of the two ruling houses;
– in 1397-1523 the Norway-Denmark-Sweden union, established by the will of Margareta, queen of Denmark, who also became the sovereign of Norway – this was called the “Union of Kalmar”;
– in 1523-1814 the Norway-Denmark union; arisen from the breakup of the Kalmar Union;
it ceased when the Napoleonic marshal Bernadotte, defeated the king of Denmark, ordered him to restore independence to Norway;
– in 1814-1905 the Norway-Sweden union: created by Marshal Bernadotte himself, who
– in 1818 managed to become sovereign of the two united kingdoms. This last union dissolved in
– completely peaceful way thanks to the Norwegian Parliament, which managed to persuade the Swedish government of the impossibility of continuing to keep a nation, as advanced and industrious as Norway, under the dictates of Sweden.

On October 26, 1905 Norway, therefore, regained its full independence; at this point he had to choose between two systems of government: Monarchy or Republic. A popular referendum was called from which the Monarchy verdict came out. For the throne of Norway the second son of the king of Denmark was called, who took the name of Haakon VII.

After several years of political stability and the unscathed overcoming of the First World War, in March 1935 the government then in office had to resign to give way to another, of Labor origin. This change was brought about by the House’s vote against the government’s decision to increase spending to eradicate unemployment.

The incoming ministry, headed by Nygaardsvold, assumed office, remained there uninterruptedly and indeed strengthened even more with the elections of 18 October 1936.

In foreign policy, Norway always expressed its collaboration with the northern states; he proclaimed his neutrality, also to better protect his interests. But with the conviction that in order to maintain this state of neutrality it is necessary to be able to count on a solid national defense, the Norwegian government in 1937 approved an extraordinary budget and to obtain the necessary means imposed an extraordinary tax on capital and an additional tax on large incomes.

At the outbreak of the Second World War, Norway confirmed its neutrality. But soon it became clear that this neutrality would not last long. In fact, Hitler, interested in the Swedish iron that was transported to Germany through the Norwegian territory, occupied the country in order to continue carrying out his trades. And this is also because Britain, to counter Germany on the sea, had taken steps to undermine large stretches of the Norwegian coast.

Hitler sent an ultimatum to Norway on 8 April 1940 so that Norway would not resist the German army. And the Norwegian government, after inducing the general mobilization, withdrew, together with the royal family, to Hamar, north of Oslo. The Germans began, with great means, the sudden invasion. As they progressed they occupied the radio stations, cutting the power and telephone lines, guarding all the offices.

The Norwegian government continued to move further and further north until it reached Tromso, the extreme edge of Norway. To counter the German march, a Franco-English army was set up which arranged itself in two different actions, aimed at dividing the occupation forces and preventing the Germans from transporting Swedish iron.

But the preparation time for these actions had been decidedly too short, and moreover the number of Germans was overwhelming, so in a few days the Franco-British were forced to withdraw and with this ended the campaign of central-southern Norway.

Another attack was attempted on Narvik; there was some success as 7 German fighters were destroyed; however the sudden fall of the Maginot line and the swift occupation of France, advised the re-embarkation of the Franco-English troops to England, right from Narvik. And at this point the whole Norway campaign ended.

On June 10, 1940 King Haakon also fled to England. First, however, he commissioned General Ruge to officially announce the capitulation of Norway. But at the same time he issued a solemn declaration of continuity of the struggle on other fronts.

Meanwhile, a puppet government had been established in the country not recognized by the king, chaired by V. Quisling. Hitler did not like his presence, had him transferred to other positions and in his place he set up a board of directors with exclusively technical tasks. Then he made Commissioner J. Terboven appointed to declare the monarchy fallen and later the Board of Directors was also dissolved.

And a vast movement of resistance to the invaders began. All social classes joined it: elementary teachers, religious organizations, unions; but on all camps the resistance opposed by the teachers and students of the University of Oslo camped out. On November 30, 1943 Terboven had the university surrounded by the Gestapo and the SS. About 1,500 students were taken prisoner and deported to Germany.