The history of the Dutch people tells us that after suffering floods, overflows, wars, invasions, destruction and death, no nation has been able to emerge from the misfortune with such tenacity as the Dutch, over time, have been able to do.

One of the greatest men of this people, William the Taciturn, coined a motto for himself, which instead can be adapted to everyone: “I will continue to resist”.

In 50 BC the Romans invaded the territory and found populations of Germanic lineage: the Frisians in the north and the Batavi in ​​the south. They lived off hunting and fishing and the Romans, having to cross large and tumultuous rivers, worked very hard to subdue them. The Romans took advantage of the work of the natives but also worked to improve it. The Batavi, in fact, learned from the Romans to build dams and dig channels to harness the water that poured with the fury of the sea, flooding the areas. As the decline of the Roman empire approached, their dominion also loosened until in 400 AD it ended completely. And other Germanic populations arrived in the region. In the 6th century there were the Frisians, always in the north, the Saxons in the center and the Franks in the south. See Countryaah for population and country facts about Netherlands.

The majority of the population is Dutch. Minorities are the Indonesians and Ambonese who have immigrated since 1949, Indonesian-Papuan mixed race. Until the Dutch Guiana became independent in 1975, mainly dark-skinned Surinamians came who wanted to keep their Dutch citizenship. In addition, more than half a million foreigners, mostly Turks, Moroccans, British and Germans, live in the country. The integration of minorities and foreigners is considered exemplary by European standards. Around 360,000 Frisians still live in the province of Friesland, and their language is permitted there as an official and school language alongside Dutch.

The Netherlands is densely populated. In 1999 around 89% of the population lived in cities and urbanized communities. The four largest cities in the country, Amsterdam, Rotterdam, The Hague and Utrecht, along with Haarlem, Leiden and Dordrecht, are part of the rapidly growing metropolitan area of ​​Randstad Holland. Two thirds of the economic potential is concentrated in this agglomeration, which takes up around ten percent of the country’s area. Almost half of the residents of the Netherlands live here. The provinces of Drente, Friesland, Flevoland and Zealand are relatively sparsely populated. 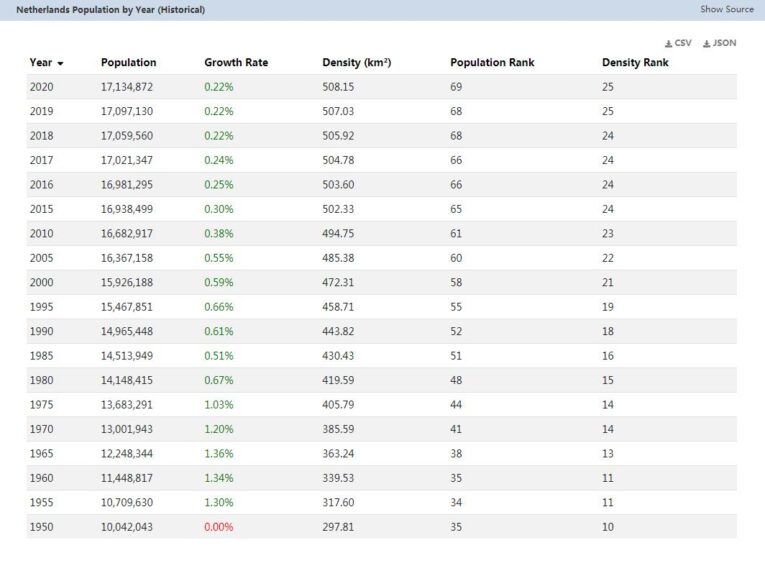 The latter, after bloody wars, managed to subdue the others who, however, tried several times to rebel, until they were definitively eradicated by Charlemagne, who reigned there from 768 to 814, and who imposed the Christian religion on the people.

In the following century, all the lands conquered by Charlemagne and which constituted the so-called “Carolingian Empire”, were dismembered and became many small states, very often at war with each other. Then from the twelfth to the fourteenth century the borders of these states were modified which were reduced to 4: Holland, Flanders, Brabant and Gelderland, all governed by foreign sovereigns.

Then in the fifteenth century, dynastic wars, and other events, once again divided these states which in the end were 17. But in 1548 a domination began in those lands that was not only military but also religious, brought by the armies of Charles V, king of Spain, and tending to fight all the Protestant and Calvinist states of worship.

Some states did not submit and, through hard struggles, managed to remain independent. And the greatest ruler in these struggles was a Dutch nobleman, William of Orange, called the Taciturn. The House of Orange was the one that gave the state a large number of valiant captains and men of genius and that over time brought Holland to complete independence.

In 1579 some northern states joined together to fight the Spaniards, and formed the Union of Utrecht by signing an agreement which represented the true beginning of the political autonomy of the Protestant provinces. In 1581 they rebelled against the Spaniards and founded the “Republic of the Netherlands”, which took the name of Holland much later.

Instead the southern provinces remained Catholic, under the dominion of the Spaniards, and formed what would later become Belgium.

In the 17th century, great progress was made in the economy, due to the power of the Dutch fleet which owned 16,000 ships, more than the French and English ones combined. And in this period the Dutch colonial adventure also began in the two Americas, South Africa and Indonesia.

Then throughout the eighteenth century the Dutch Republic found itself at the center of the succession wars that were fought among them by the great powers, namely France, Spain, England and Austria. The reigning houses, in fact, were all related to each other, and for this reason they sought to advance rights on the territory they wanted to occupy because rich and fertile.

And in 1806 once again Holland had to succumb to a foreign dominion, that of Napoleon I, who created the “Kingdom of Holland” and placed his brother Luigi Bonaparte at the head of the kingdom. When Napoleon was defeated, in the Congress of Vienna in 1815, the representatives of the European states decided to place on the throne of Holland and of Belgium, which were still united, the son of the last crown prince (statolder) William V, who went up to the throne in that year with the name of William I and a new dynasty began.

In the following years the economic situation continued to improve, so much so that Holland became one of the richest countries in the world. The Dutch created colossal shipping companies that concentrated the most profitable world affairs in their hands.

Meanwhile, a strong nationalism was developing among the people, contrasting not only the small communist party, just born, but also the Nazi party, headed by A. Mussert, who was making his first appearances, modeled on the German one of Hitler.

Despite the growth of the unity through democracy movement, this party had forfeited 10% of the votes in the provincial elections of 1936. In those of 1937, however, the results were so disappointing that Mussert also renounced to enter Parliament. The government was entrusted to Colijn who proved wise and always attentive to the defense of democratic freedoms. The cabinet was composed of a majority of right-wing deputies.

Important works such as reclamation and construction of bridges and highways began immediately. From 1935 to 1937 there was a great economic recovery and the port of Rotterdam carried out an activity that has not been recorded since 1929.

In foreign policy the Netherlands preferred to remain out of alliances with other countries but especially with the Nordic ones took initiatives of economic collaboration.

In 1937 Hitler offered Holland a pact for the defense of the territory, an offer which was refused. And the country continued to carry out its work within the League of Nations and in 1938 confirmed its collaboration with the blockade of the “states of Oslo”, ie Belgium, Norway, Sweden, Denmark, Finland, Luxembourg.

But meanwhile threatening clouds loomed in Europe and Holland immediately took care to reorganize its armed forces, in all sectors. In 1938 a law was drafted that would double not only the number of young people to be called to military service but also the period of activity. And even before the law was approved, the union of Austria with Germany occurred, and then all the soldiers about to leave the service, because dismissed, were instead detained thus doubling the contingent.

In July 1939 the Colijn government fell and new prime minister was Jonkheer De Geer. The European situation had become worrying: many Dutch territories, along the water line, were flooded for possible defense, while the government on September 1, 1939 proclaimed its neutrality.

Simultaneously Hitler ordered the invasion of Poland. As the German troops were gathering at the border in the first days of May, Holland doubled its vigilance. On May 9, 1940, the news of the next German invasion was sure and the operation started the next day. And this was accomplished not only by the actual armed forces but by many other various elements that formed a kind of “fifth column”. They were thousands of Germans who had previously entered the country illegally, the staff of the local delegation and a large number of German service women who worked for Dutch families. A few hours after the invasion, by the German foreign minister a message was delivered to the Dutch foreign minister in which his government guaranteed the integrity of the state and dynasty in exchange for non-resistance. Meanwhile the queen, with her family, had managed to reach London and from there she continued to coordinate the war actions with all the means and resources at her disposal.

Undoubtedly the soul of the government in exile was Queen Wilhelmina, assisted by Van Kleffens and the minister De Geer who resigned in December 1940, replaced by prof. Gerbrandy.

At the beginning, the German occupation troops tried to gain the sympathy of the people, but failing to do so, the well-known Nazi methods immediately applied: concentration camps and persecution of the Jews. Dutch resistance made life very hard for the Germans. They sought to establish a government similar to that of Norway, the famous Quisling, but only in late January 1943 were they able to form an organ of 8 all Nazi advisors, three of whom were killed in the first ten days of installation. Meanwhile, the engineer Anton Adrian Mussert had become one of the most active collaborators of the Germans so much that he deserved the title of “leider of the Dutch people”.

When the attack on the American naval base of Pearl Harbor occurred on December 7, 1941, Holland declared war on Japan, making clear the strategy that that country was applying. Japan, in fact, intended to occupy the Dutch Indies and to do this it had to first eradicate the maximum opposition power, that is the United States.