From the second century BC, the territory corresponding to present day Luxembourg was inhabited by a Celtic tribe. From the 1st century BC until the barbarian invasions it belonged to the Roman Empire. During the following period no events worth mentioning.

From the fifth to the ninth century after Christ this territory, like all those of Europe at the time, was invaded by various populations of barbarians until, with the advent of Charlemagne, it became part of the Carolingian Empire.

In the tenth century the feudal lord Count of Bigdau, Sigefredo I, after having had a castle built, surrounded him with a territorial complex, subjected to him, not only as a count but also as a secular abbot of Echternach. He founded Lutzelburg County (hence Luxembourg) and was always loyal to the House of Saxony.

After 1056 this territorial complex suffered a split, since on the death of Gisleberto, the count of the time, the two sons each inherited their own part. The eldest son, Corrado I inherited the main territory while Ermanno, the younger son, had the possessions north of the Ardennes, making up the County of Salm. 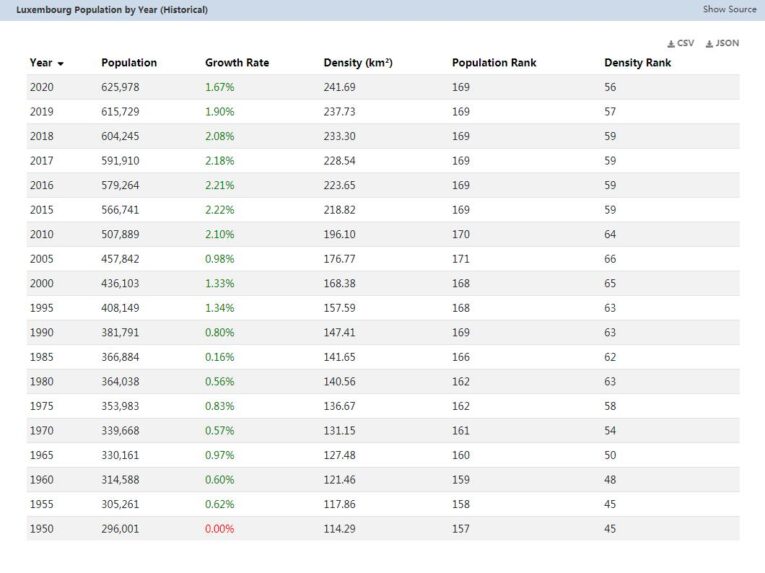 The population is made up of Luxembourgers and foreigners, who make up more than a quarter of the total population. They came to the country to address the chronic labor shortage. Most come from neighboring France and the southern EU countries. Most Luxembourgers speak Luxembourgish or Lëtzebuergesch, a Moselle-Franconian dialect, as a colloquial language. It was made the national language in 1984.

The population is concentrated in the capital Luxembourg and in the heavily industrialized canton of Esch in the south of the country. The Ösling is sparsely populated.

The capital and residence of Luxembourg lies on the Alzette and Pétrusse rivers. The old fortress-like upper town with the grand ducal palace and cathedral is located on the steeply rising plateau. UNESCO declared the fortifications and parts of the old town a World Heritage Site. Since 1966, numerous modern buildings for the Center Européen have been built on the Kirchberg plateau. Large bridges connect the old town with the new town below the rock. The city is the seat of several EU institutions such as the European Court of Justice and the European Court of Auditors.

There is general compulsory education from 7 to 15 years of age. Luxembourg has a university center.

Their descendants took turns and with marriages and with other vicissitudes, they gave a different imprint to the populations, which from purely Germanic became mixed, for the introduction of the Walloons. See Countryaah for population and country facts about Luxembourg.

In the 14th century, a member of the Luxembourg House was named emperor of Germany under the name of Henry VII. He, in 1310, ceded it to his son, the king of Bohemia, Giovanni, called the Blind, who cared very little for this county, which in 1354 became the Duchy. This was assigned to Wenceslas II who ceded it in 1388 to his nephew Jost of Moravia.
The small state, passing from one hand to another, in the twelfth century, after the wars in which the Netherlands was involved, passed into the hands of Louis XIV, king of France. Then, in the eighteenth century, with the treaty of Utrecht and Rastadt of 1713/14, after being in the hands of other rulers, he landed in Austria.

With the advent of Napoleon it was conquered by French troops in 1794 and annexed to the Republic in 1795. With the Vienna Treaty of 1815 it was finally able to summarize its own physiognomy, but without some territories, such as Saint-Vith and Bitburg, which were ceded to Prussia. And from Duchy it became Grand Duchy of Luxembourg, in favor of the Netherlands. In 1830 he took part in the Belgian revolution. However, he maintained his own life and in 1841 the Grand Duke William I granted the liberal Constitution.

In 1842 the Grand Duchy entered the German customs union. In 1866 he broke public relations with Germany and in 1867 proclaimed his neutrality.

Despite this, on 1 August 1914 the Germans invaded and occupied it for the duration of the First World War. After the war, it left the German customs union and entered the Belgian one which went into effect on May 1, 1922.

At the outbreak of the Second World War, Luxembourg was again invaded and occupied by the Germans, On April 15, 1948 he definitively renounced unnecessary neutrality.

The life of the country, immediately after the war, was stable both economically and politically. The elections of 1951, while registering an increase in socialists and liberals, did not undermine the majority of Christian socialists.

The then cabinet ruler, Dupont, was replaced in 1953 by Joseph Bech, also Foreign Minister, who remained in office until December 1958 with the coalition between Christian social and socialists.

The elections of May 1954, however, recorded an increase in the Christian social and the coalition was reconstituted. In the years 1957/58, due to the coal crisis, there was an economic and political recession. Lively controversies between socialists and Catholics led to the dissolution of Parliament in December 1958 and new elections were held in February 1959. These assigned a large success to the liberals, who formed with the Christian social a government presided over by Pierre Werner.