Principality between Austria and Switzerland, it was always ruled by an ancient and noble family, coming from Styria, which spread mainly in Austria, Moravia and Bohemia. The entire population of the principality was of Germanic origin and of Catholic religion.

Through numerous principles of the various branches of the family, the young branch of Prince Gundacaro reigned at the beginning of the eighteenth century, from which the current ones derived.

Among the countless characters of the family, two stood out in particular and were: Karl and Joseph Wenzel. The first, Karl von Liechtenstein, born in Moravia in 1569, at 21 years of age had the administration of the assets of Moravia and Austria and actively participated in public life.

In May 1600 he was called to the Court of Prague where he was entrusted with the highest task of those times, namely the Supreme Butler. Shortly before, he had become a Catholic.

He remained in the service of the emperor until 1603, after ordering the administration, then returned to Moravia. He returned to the Court for another period but then definitively left office in 1607.

The inept Rudolph II reigned in Prague, he took part in the revolt against him organized by Archduke Mattìa. In reward for his help he was appointed Prince of the Empire and in 1614 he had the Duchy of Opava as a fief.

At the outbreak of a revolt in Moravia in 1618 he fought for the emperor and played an important part in the battle called the White Mountain.

In 1620 he was appointed by Ferdinand II plenipotentiary administrator of the Kingdom of Bohemia. In 1622, having now acquired an almost dictatorial power in the Kingdom, he tried by all means to dampen the Habsburg’s revengeful policy towards the Bohemians. On February 12, 1627 he died.

The second, Joseph Wenzel, born in Prague in 1696 and died in Vienna in 1772, began his military career at a very young age, fighting against the Turks; he was ambassador to the French Court; he was appointed field marshal during the Austrian succession war and reported an important victory in Piacenza in 1746; he was entrusted with various diplomatic missions and became general manager of the imperial artillery, in whose organization he made significant improvements.

But he was also a man of vast culture and with a remarkable artistic sense. As evidence of this, there is a very rich gallery of paintings by him left to his death.

Since 1921 the monetary unit has been the Swiss one. Since October 1936, therefore, the country’s government has adopted all the rules sanctioned by the Swiss Confederation.

The government was ruled by Prince Francesco di Paola until his death on 25 July 1938. He was succeeded by Prince Francesco Giuseppe who, like all those who preceded him, continued to live privately in Vienna. After the famous “Anschluss”, that is, the union of Austria with Germany, even the principality, although appearing formally independent, underwent National Socialism instead. For this reason, at the end of the Second World War, with the victory of the Allies, some personalities, offenders of high treason and collaboration with the Nazis were tried.

In Vienna, the Liechtenstein Art Gallery in 1945 was evacuated and transferred to the principality. Instead the most important assets that the princely family had in Czechoslovakia were confiscated, nor was the return dealt with the Czech-Swiss agreement.

In December 1955 it was revealed by a census that in ten years the population had increased by 2664 units, especially concentrated in Vaduz, the capital. There was also a significant tourist increase. See Countryaah for population and country facts about Liechtenstein. 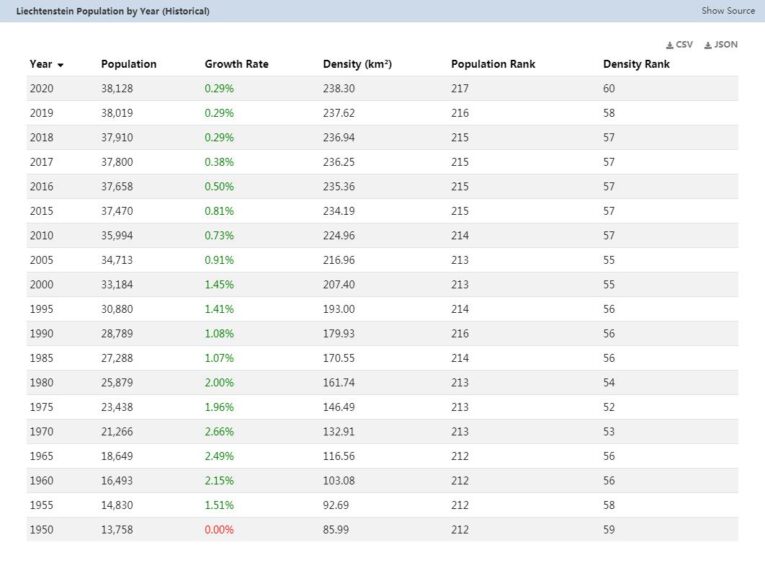 On September 1, 1957, elections were held but were canceled due to election fraud, suspected by 7 MPs from the Patriotic Union Party. They were repeated on 22/23 March 1958 and the Progressive Party obtained 54.5% of the votes and therefore the government.

On 23/24 October 1959 in Vaduz there was a meeting at the top of the so-called “4 Piccoli”, ie S. Marino, Monaco, Liechtenstein and Andorra. On that occasion, the commitment to world peace was decided for all four of them in order to also benefit from tourism. Then Luxembourg and the island of Sark were invited to participate in the future meeting, to be held in Andorra in 1960. But this proposal, which started from Monaco, was neither approved by Liechtenstein nor by S.Marino, indeed it was even opposed, while Andorra remained indifferent. And this is because in the principality it was believed that Luxembourg was to be considered a giant state compared to the four, also for its membership both in NATO and in the European Common Market. And as far as the island of Sark was concerned, serious doubts were raised that it was independent of Great Britain.