The Kingdom of Spain and Portugal are located on the Iberian Peninsula in south-western Europe. In addition to mainland Spain, the Balearic Islands in the Mediterranean and the Canary Islands in the Atlantic as well as smaller possessions in North Africa belong to Spain. The country borders on France in the Pyrenees ridge.

The capital and economic center is Madrid in the center of the country. The inner highlands, the Meseta, are surrounded on all sides by peripheral mountains. Agriculture produces rich yields partly with the help of artificial irrigation. Vegetables, fruit and wine are important export items. The dominant branches of industry are vehicle and mechanical engineering. Spain is one of the most important countries for international travel.

Abbreviated as ES by ABBREVIATIONFINDER, Spain is located in southwestern Europe on the Iberian Peninsula (Fig. 1). The kingdom is the fourth largest state in Europe after Russia, Ukraine and France. Land borders exist in the northeast with France and Andorra, in the west with Portugal. In the north and northwest and in the extreme southwest, Spain borders the Atlantic Ocean, in the east and southeast the Mediterranean. The coastline – excluding islands – is 3,144 km, 1663 km of which is on the Mediterranean Sea. The country includes the Balearic Islands, the Canary Islands and, in North Africa, the small areas of Ceuta and Melilla. The Gibraltar peninsula on the southern tip of the Iberian Peninsula has been administered by Great Britain since 1704.

The capital Madrid is centrally located in the middle of the country.

Mainland Spain occupies over four fifths of the Iberian Peninsula. The heartland of Castile covers about two thirds of the total area and extends over a wide, sparsely populated plateau, the Meseta.This is divided by the Castilian Scheidegebirge into the smaller, on average 800 m high north meseta and the average 650 m high south meseta. The Scheidegebirge reaches an altitude of 2592 m in the Sierra de Gredos. The south meseta continues to Portugal and slopes down to the west. The mesetas are surrounded on almost all sides by marginal mountains, which only give space to narrow coastal lowlands towards the sea. In the north, the Cantabrian Mountains, which merge to the west into the mountains of Northern Galicia, form the mountain range. The east is bounded by the Iberian Mountains and the south by the Sierra Morena and the Betic Cordillera. The Mulhacén towering here in the Sierra Nevada is the highest mountain on the Spanish mainland at 3478 m. Only the Pico de Teide on Tenerife is higher and reaches a height of 3718 m.

The fringes of Spain are the Galician Mountains in the northwest, Asturias and the Basque Country in the north, the Ebro Basin with Navarra, La Rioja and Aragon, and Catalonia, which borders the Mediterranean, with the Catalonian Mountains. In the south lies Andalusia, drained by the Guadalquivir. The Pyrenees form the outermost edge in the northeast, the main ridge of which forms the border with France. The independent principality of Andorra is located in the Pyrenees. 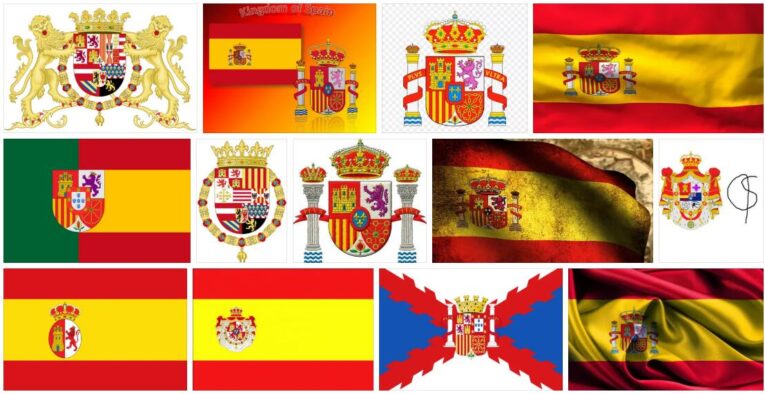 The northern edge of the Iberian Peninsula is an always humid climatic area; Westerly winds bring year-round precipitation and the temperatures are very balanced due to the proximity to the sea. Most of the country is characterized by the subtropical Mediterranean climate. Here there are long, dry summers with high temperatures and maximum rainfall in spring and late autumn (Fig. 3). The Meseta is shielded by its altitude and the surrounding mountains from the influences of the Atlantic and Mediterranean climates. The climate here is continental, with high summer temperatures (up to 40 °C) and cold winters (down to –8 °C). The annual total of precipitation is between 300 mm and over 2000 mm in the coastal mountain regions or central mountains.

Because of the great height differences between the coastal lowlands and the high mountains, the vegetation has corresponding gradations. Above the olive and maquis garrigue stage with evergreen oaks that are typical of the lowlands, there is a coniferous forest zone with pines or a deciduous forest zone with beeches. The high zones have barren grasslands and dwarf juniper stands. A strip parallel to the coast in the southeast between Almería and Alicante has the character of a semi-desert with annual rainfall between 110 and 290 mm.

The longest river in Spain is the Tagus, which continues as the Tejo to Portugal and flows into the Atlantic after 1008 km. The Duero and in the south the Guadiana, which forms the border with Portugal for long stretches, and the Guadalquivir also flow into the Atlantic. The 910 km long Ebro is the only large river that drains into the Mediterranean.

The most important Spanish tourist destinations include the islands of the Balearic Islands and the Canary Islands. The Balearic Islands in the western Mediterranean form an autonomous region (and province). The capital of the 4992 km² archipelago with 788,000 residents is Palma de Mallorca. The residents speak a Catalan dialect. The most famous islands are Mallorca, Menorca, Ibiza and Formentera. The main branch of the economy, tourism, benefits from the favorable climate, with mean January temperatures of 9–11ºC and August temperatures of 24–26ºC. The island of Mallorca in particular has offers for mass tourism with all the known negative phenomena as well as for individual travelers. Agriculture produces citrus fruits and tomatoes on irrigated land, and almonds, apricots, olives, carob and wine in dry fields.

The 7447 km² Canary Islands, or Canaries for short, a group of seven larger and six smaller islands are located in the Atlantic off the north-west coast of Africa. In the autonomous Spanish region about 2 million people live mainly from year-round tourism thanks to the constant mild climate. The most famous islands are Tenerife, Gran Canaria, Lanzarote, Fuerteventura, La Palma and Gomera. In the southern part of the two main islands of Tenerife and Gran Canaria, in particular, unbridled building activity has led to ugly urban castles and urban sprawl. Agriculture also benefits from the favorable climate and exports bananas, tomatoes, new potatoes, vegetables, onions and almonds. The portsLas Palmas and Santa Cruz de Tenerife are important bases for Atlantic shipping.

Almost all of the islands are of volcanic origin and their surface shapes are often shaped by volcanism. The two eastern islands, Lanzarote and Fuerteventura, sit on the African continental shelf, the other islands rise from 3000 m below the sea – on Tenerife up to a height of 3718 m. The Pico de Teide is the highest mountain in Spain. The oceanic-subtropical climate is influenced by the constantly blowing dry northeast trade winds, which are only interrupted by brief winter rains. The indigenous population of Berber origin, the Guanches, was absorbed into the Spanish population.

More than 72% of the Spanish population make up the Spanish, better Castilian, speaking part of the population. These are composed of Castilians, Asturians, Aragonians and Andalusians. The 2.3% Basques in the northeast have their own pre-Indo-European language. The 16% Catalans with their own Romance written and literary language and, to a lesser extent, the 8% Galicians who are close to the Portuguese and have their own Romance dialect, have a special position in folk culture and language. Catalan, Basque and Galician are taught as compulsory languages ​​in the respective regions. Extreme conflicts with separatists exist in the Basque Country, but tensions are also emerging in Galicia and particularly in Catalonia. Around 300,000 Gitanos live all over the country, but mainly in Andalusia. as the gypsies call themselves in Spain. They speak Caló, a language of their own, influenced by Andalusian Spanish.

From 1939 to 1975 there was a dictatorship under General FRANCO in Spain. The resulting isolation significantly slowed economic development. After a phase of democratization, Spain joined NATO in 1982 and the EC in 1986. The country belongs to the euro zone.

Until 1960 Spain was predominantly an agricultural country. The share of agriculture, forestry and fishing in the creation of the gross domestic product is steadily declining, while the share of the service sector is increasing, not least due to the booming tourism (Fig. 6).

The agricultural area makes up around 60% of the total area; a large part carries permanent crops such as wine and olives. A considerable part of the arable land lies fallow. While small businesses predominate in the more humid north, the number of large businesses increases from north to south. The plateaus, mainly cultivated in dry fields, are the main area of ​​grain and legume cultivation, in the south also of olive cultivation. Spain is the largest olive oil producer in the world. In addition, nuts and almonds are harvested. Potatoes and maize are also grown in the northwest. The irrigated agriculture is becoming increasingly important. Several harvests per year are possible on irrigated land, for example in the Huertas of Murcia and Valencia.

Sheep breeding is important on the highlands, and a large part of it is still practiced as remote grazing. The main areas of cattle farming are Galicia, Asturias and the Basque Country. A specialty is the breeding of fighting bulls in Andalusia.

Thousands of years of overexploitation of the forest have largely been destroyed; There are only closed forest areas in the north and north-west.

The fishing, especially targeting sardine and tuna, still plays a major role. Next to Denmark, Spain is the largest fishing nation within the EU. The main fishing ports are on the Galician coast, where mussels and oysters are also raised.

Natural resources such as hard coal, iron ore, pebbles, copper ore, lead, uranium ore, rock and sea salt are mainly found in the peripheral landscapes. Spain is one of the largest producers of mercury worldwide (near Almadén). Oil and natural gas are produced in offshore operations off the northeast coast and in the Bay of Biscay. Electricity generation is mainly based on the energy sources crude oil, natural gas and coal. In southern Spain good results are achieved with solar power plants due to the long hours of sunshine.

Important branches of industry are mechanical engineering and vehicle construction – Spain is the third largest car producer in Europe after Germany and France – metal processing, shipbuilding, aluminum, electrical, food (canned fish, fruit, wine, olive oil), textile and shoe industries. The traditional heavy industry with iron and steel production in the resource-rich Basque Country has lost its importance. The main trading partners are the EU countries, especially France and Germany, and the USA. The trade deficit can be partially offset by the decades of steadily growing income from tourism and the money transfers from Spaniards who work abroad.

Spain is one of the main destination countries for international travel. In addition to the Balearic and Canary Islands, tourism centers are the coastal strips on the Mediterranean Sea and cities of cultural and historical interest such as Madrid, Barcelona, ​​Seville, Granada and Córdoba.

from 900 BC BC: Celts invade the Pyrenees and mix with the Iberians.

3rd century BC Chr.: Carthaginians and Romans divide the Iberian Peninsula among themselves. After the 2nd Punic War, Rome rules unrestrictedly.

507: Toledo becomes the capital of the Visigoth Empire.

711: Landing of the Arabs on the Iberian Peninsula. From 756 Córdoba is the capital of Moorish Spain.

722: With the battle of Covadonga in Asturias the Reconquista begins (“reconquest” by the Christians).

1236: The fall of Cordoba marks the decisive turning point for the Reconquista.

1469: Union of the kingdoms of Aragon and Castile through the marriage of Ferdinand and Isabella, the “Catholic Kings”.

1492: The Reconquista ends with the fall of Granada. In the same year, Columbus discovered America in the service of Spain.

1519: KARL I becomes Emperor of the Holy Roman Empire as KARL V. Spain is a world power.

1701: Beginning of the War of the Spanish Succession

1833: Beginning of the Carlist Wars. Spain is a republic for a short time.

1975: The dictatorship ends with the death of FRANCO. JUAN CARLOS ascends the Spanish throne.

1979: The Basque Country and Catalonia are granted autonomous status, and in 1981 Andalusia and Galicia too. The terrorist attacks by the Basque separatist group ETA continue.