In the eastern part of this land there is a large wild plain, called “Puszta”. Its appearance, now somewhat softened by a wider mechanized exploitation of the land, is not only of a physical nature, such as the scarcity of the rains, but numerous centuries of abandonment have contributed to making it so.

The Magyar people have never been able to populate it because the region has no safe natural boundaries, so in every century it was crossed by raiding and cruel nomads. The history of Hungary is a continuous series of foreign dominations, devastations and persecutions, and to every abuse this proud people responded with insurrections and heroic revolts.

The official name of the state is “Magyar Nepkoztarsasag”, that is Magyar Republic. It derives from Magyar which is the name of its population, which settled in the current territory towards the end of the ninth century after Christ. See Countryaah for population and country facts about Hungary. The Magyars, of Ungro-Finnish origin, came from Caucasian regions. The Magyar state (also called Hungary from the other name of the Hungarians with whom the Magyars were called) was ruled at its birth by a chief named Arpad. He led the Magyars to drive out the Germanic peoples who had settled there after the fall of the Roman Empire.

With a proportion of 97% Magyars, Hungary’s population is relatively homogeneous. There are also some minorities in Hungary. The largest group are the Hungarian Germans with around 200,000 members. Most of them live in the Budapest area and on the western border of the country.

Two thirds of Hungarians live in cities. Budapest is the largest urban agglomeration. Every fifth Hungarian lives in the Budapest metropolitan area. In contrast, the agriculturally intensively used areas of the Small and Large Hungarian Lowlands are much less populated. 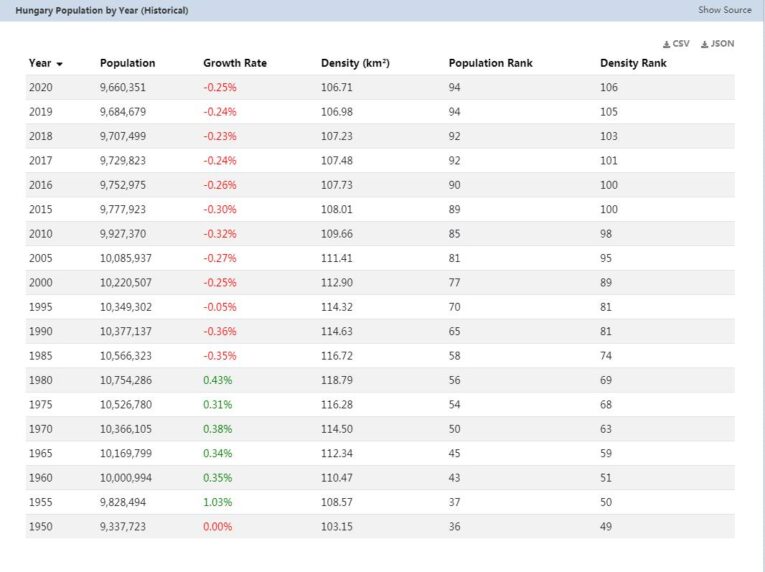 Towards the tenth century, under the reign of Geza, they converted to Christianity. At the death of Geza Stefano, the son, who was said to be the Saint, ascended the throne, who conquered various lands, reorganized the administration and gave a Code of laws (1010).

The Arpad dynasty died out in 1301; after that there were Angevin kings and emperors of Germany. In the second half of the 15th century, Matthias Corvinus saved Hungary from the Turks and guided it towards the Renaissance civilization, making it the first power of central Europe. He was also king of Bohemia.

The decline began with his successors: Ladislaus of Bohemia and Louis II, his son. Since the latter was killed by the Turks at the Battle of Mohacs in 1526, part of the nobles elected King Ferdinand of Habsburg, brother and successor of Emperor Charles V, and thereafter the Kingdom of Hungary was united with the Empire. But part of the country, Transylvania, did not recognize this state of affairs, he broke away under national standards and accepted the sovereignty of the Ottoman Empire.

After more than a century and a half of war against the Turks, Hungary was totally under the rule of the Habsburg house in 1699. But the Habsburg rulers were no better than the Turks in the government of the country, as absolutists, true rulers.

In the 18th century, the Habsburgs, following the social theories of that time, began to introduce reforms in Hungary. However, they did not have great results on a practical level since the government of the monarchy remained always authoritarian and absolute.

In the nineteenth century the revolutionary movements of France and then of Italy also extended to Hungary, where the patriots were led by the poet Alessandro Petofi and Luigi Kossuth. He, after an active oratory and press campaign against the reactionary government of Metternich, for which he suffered three years in prison, was elected member of the Magyar Diet in 1847. Head of government in 1848, exponent of nationalism, embodied the revolution he had to transform feudal Hungary into a constitutional state.

But the revolution failed, both because of conflicts between the leaders and because of the preponderance of Austrian weapons, aided by Russian forces. Hungary was then transformed into a country of the Crown, united to the empire of Austria, which then made concessions: in 1860 the Constitution and in 1867 it was erected as a kingdom in royal union with the Empire of Austria. Thus there was the dualistic regime of the Austro-Hungarian Monarchy. But the differences between the Diet and Vienna remained intact.

This state of affairs lasted until the First World War, in which Hungary fought alongside Austria. The end of the war brought about the end of the Austro-Hungarian monarchy. Hungary acquired independence and on November 16, 1918 proclaimed the Republic. But the peace treaty concluded in Paris took most of its territory from Hungary; in fact it lost Slovakia and Ruthenia, which were incorporated by Czechoslovakia, Transylvania and Banat which were ceded to Romania, Croatia and Slavonia which passed to Yugoslavia and the city of Rijeka which was assigned to Italy. In 1940 it joined to the Tripartite Pact and at the beginning had significant improvements.

But the disastrous Second World War brought Hungary first to invade Russian, then German, troops and in February 1945 it was definitively occupied by the Russians.

On January 14, 1946, it was established as a People’s Republic. After the peace treaty of April 1947, with a first coup d’etat the banks and industries were nationalized; in 1948 schools were nationalized and with a second coup in July 1948 Hungary became a communist state.

The new regime planned agricultural and industrial production and led the fight against political opponents and the clergy thoroughly. Between the episodes of anti-religious politics, which accompanied the establishment and consolidation of the communist regime, the process, which ended with the sentence to life imprisonment, by Cardinal Primate Joseph Mindszenty (February 8, 1949) and the dissolution of most religious Orders, in September 1950. The animator of the People’s Republic, Mattia Rakosy, one of the most representative figures of European communism, resigned in July 1953, and he was succeeded by Imre Nagy, with a more moderate program: reduction of the five-year plan, too vast, and reconstruction of the small property.

Nagy was immediately concerned with improving the lives of the people, increased investment in agriculture, reduced the price of bread and abolished rationing and also abolished concentration camps. Then decided that the membership to agricultural cooperatives must be voluntary and with this in 1954, the socialization of the campaigns was reduced a lot.

Meanwhile Rakosy had gone on a trip to the Soviet Union, from which he returned in January 1955. He immediately regained some political power and in March, accusing Nagy of “deviationism” and “anti-Marxism”, made him expel from the party and from state offices, and had him replaced by Andras Hegedus, as Chairman of the Board. The socialist character of agricultural industrialization and collectivization was immediately restored.

Rakosy wanted to keep Hungary ever more anchored to the Soviet Union, naturally to the detriment of the people’s desire for freedom. Intellectuals who asked for more freedom, eliminating censorship in the press and in cultural and artistic activities, fueled this desire. The workers and peasants joined the intellectuals and the unrest reached proportions that worried the Soviet leaders who deposed Rakosy and placed Erno Gero as first party secretary in his place.

When anti-Stalinist riots broke out in Poland, the Hungarian people staged manifestations of joy. The head of the Union of Writers, Peter Veres, with the permission of the then Minister of the Interior, organized a grandiose demonstration which culminated in the request for the application of a socialist policy yes but independent of the Soviet Union. He also asked for participation in economic and social policy by all citizens, the possibility for trade unions to defend workers’ interests, the entrustment of the government to Nagy and the restoration of free, direct and secret voting.

Gero, who was absent from the country at the time, returned immediately to restore order and then proclaimed martial law. Then he arranged for Nagy to return to prime minister knowing that he would torpedo him because he immediately asked for the intervention of Soviet troops, already present in the country. The people accused Nagy of treason. But even Gero, believed to be truly responsible for the situation, was exonerated and replaced by Janos Kadar, considered “titoista”.

But now the seed of rebellion had invaded all areas of public life. The people were all striving to obtain complete freedom of action and all the appeals that Nagy made to restore order in the country failed. He even declared Hungary’s neutrality and the country’s willingness to exit the Warsaw Pact. No results were obtained and so Nagy had to abandon the post of president who instead went to Kadar.

And since the West at that time was engaged in the affairs of the Suez canal, nationalized by Egypt, the Soviet Union, with the massive dispatch of mechanized troops, invaded Hungary with impunity and in a short time silenced the insurgents. All this cost the loss of about 25,000 people.

In December 1956 Hungary, governed by Kadar, returned fully in the framework of the Soviet system. Nagy, considered a traitor, was shot in June 1958. In January 1959 Kadar was replaced by Ferenc Munniche. In that same year and then in 1960 the entire system of Hungarian politics was restored, also for what the relations with the United Nations were, but a glimpse with the West was always present in economic and cultural relations.