Greece was the first land in Europe on which a great civilization arose. And this is explained by its geographical position. In fact, it is the easternmost of the Mediterranean peninsulas and the closest to the coasts of northern Africa and Asia Minor, territories that were the first to be inhabited by civilian peoples, that is, the Egyptians, the Phoenicians and the Jews.

The Greek peninsula is then surrounded by numerous islands which were, in fact, the first inhabited by advanced peoples. These then went to the coast of the peninsula and then still penetrated inside it, also attracted by the mild climate.

The first Greek civilization arose on the island of Crete 3000 years before Christ. The oldest inhabitants of Crete were the Pelasgians, or Carii, from Anatolia, that is, present day Turkey. And while the Pelasgians of Crete created a great civilization, the Cretan or “Minoan” one, from Minos, their king, those of the continent remained in a semi-barbarian state for a long time.

in XIV and XIII centuries BC, Greece was invaded by the Achaeans, an Aryan people from Central Europe. They drove out the Pelasgians, after having devastated and destroyed many lands, but then assimilated their superior civilization and began to found several villages and cities, among which the most important was Mycenae, from which the “Mycenaean” civilization took its name.
Then they went to the islands and to the coasts of Asia Minor; they conquered the island of Crete by decreeing the end of the “Minoan civilization” and then again, as skilled warriors as they were, they accomplished great enterprises, the last of which was the conquest of Troy, the city of Asia Minor, which occurred towards 1200 BC. The leader of this enterprise was Agamemnon, king of Mycenae.

The Achaeans were less civilized than the Pelasgians; they mainly dedicated themselves to agriculture, pastoralism and crafts. Their cities were small and all stood at the foot of a hill. On the hill stood the temple, for worship, and the king’s palace. Their navigation was very active, especially towards Crete and Egypt.

nell ‘XI century BC Christ experienced another invasion, that of the Dorians, a people of ancestry similar to that of the Achaeans, coming from Macedonia, Thrace and Epirus. They invaded the entire peninsula but settled mainly in the Peloponnese, that is, in Laconia, in the Messide and in the Elis. In other regions, together with the Dorians, other peoples settled, the Ions and the Aeolians.

The Greek civilization, after the arrival of the Dorians, experienced a long period of decline which lasted until 776 BC, the year in which the “Olympics” were established. At the end of this period the Dorians, the Ions and the Aeolians were now assimilated into a single lineage which was called “Hellenic”.

The Dorians were mainly shepherds and hunters so they never dealt with agriculture, which they left to the peoples that they were gradually submitting. Over the centuries this first division of tasks, therefore of the social classes, became even more profound, especially in Laconia, where the Dorians in particular had settled. And here arose the city of Sparta, where the privileged class was that of the warriors and where the “helots”, that is, the farmers, were treated almost like slaves.

But each Doric city was a “polis”, that is, a city-state. There were many and often fighting each other. They recognized their lineage only on the occasion of the Olympics. Many were the warrior and wise characters who stood out over the centuries. Sparta, with the war of Messenia (743-724), established its hegemony over the whole Peloponnese.

In this period the maritime cities conquered the Mediterranean coasts, founding flourishing colonies in Asia Minor, in Africa but above all in Italy, creating in the south what was called “Magna Grecia”.

The rise of Athens began. The monarchical government became aristocratic government, governed by an “archon”, for life, but in 753 this assignment became ten-year and in 713 not only members of the royal family, but all nobles could aspire to it. In 683 the archontate became annual and instead of a single archon it was ruled by nine members; thus was born the “oligarchy”. Then the archons, elected annually, and the popular assemblies, in agreement with the Aeropagus, that is the Council of Athens, constituted the supreme authority.

There were abuses and discontents to curb which Dracone dictated very severe laws in 621 BC. Then, in 594, to eliminate the disagreements that arose between the nobles and the people, the wise Solon proposed a reform by which political rights were extended to all citizens and at the basis of the distinction of classes was no longer birth but the wealth.

Meanwhile the Persians had tributed the Ionian colonies of Asia Minor, which rebelled, and with the help of Athens the Persians were defeated. But Darius, their king, turned his army towards Thrace where, however, he suffered serious damage. The Persian fleet was also destroyed in a storm, but that did not deter Darius from sending another army. This in Marathon was dispersed by Miltiades, leader of the Athenians. Ten years later another Persian king, Xerxes, renewed the deeds of Darius, pouring on Greece. But after several bloody battles, such as those of Salamis and Platea, he was forced to retreat and peace was restored.

Athens had the “golden age”, the one in which Pericles lived and ruled; but then he had to endure tough rivalries with Sparta, for hegemony, and he was a loser, and Sparta’s supremacy was recognized by all. Then came wars with Macedonia, where kings Philip and Alexander the Great stood out, stifling any attempt to independence of the Greek cities.

At the death of Alexander the Great, the “Achea League” was created which was to represent the greatest bulwark of national independence, but it was useless and with the return of the Macedonians, in the meantime allied with Hannibal against Rome, when it subdued Macedonia, automatically Greece was under Roman rule.

Became a “Roman province”, Greece also lost this name and was called Achaia and some cities, such as Athens and Delfo, were declared free cities. Then came the disintegration of Achaia, in the III and IV centuries after Christ, by the Goths, led by Alaric. But one of the main causes of this breakdown was undoubtedly the Crusades.

By 1100, the beginning of the first to Crusade, began the Frankish warriors penetration. With the repetition of the Crusades, it came to 4th century , around 1200, with Greece divided into many small states, or “baronies”, always dominated by the Franks. And in this period the Greeks, mindful of the splendor of their ancient empire, tried to reconstitute their national unity and succeeded. They expelled the Franks from the Peloponnese where a Byzantine emperor returned to reign.

But new invaders showed up on its borders: i Turks. These, starting the conquest of Greece, laid the foundation stone for the future desired conquest of Europe. And slowly, in the space of almost two centuries, the Turks took Greece from the Eastern Empire and total occupation was achieved with the fall of Constantinople.

Islamic Turkish laws were not very restrictive. The Greeks were able to continue professing Christian worship. And also the Orthodox Church was entrusted with various administrative and political tasks. But they applied very high taxes reducing peasants to misery; and another nefarious enterprise of the Turks was to kidnap children to educate them in the Muslim religion and to make them models of soldiers, sadly gone down in history with the name of “Janissaries”; these, over time, became so influential and overbearing that Sultan Mahmoud himself in 1826 ordered their suppression.

The living conditions in Greece became so disastrous that, towards the 1700s, the Hellenic population was reduced to about one and a half million people. See Countryaah for population and country facts about Greece. 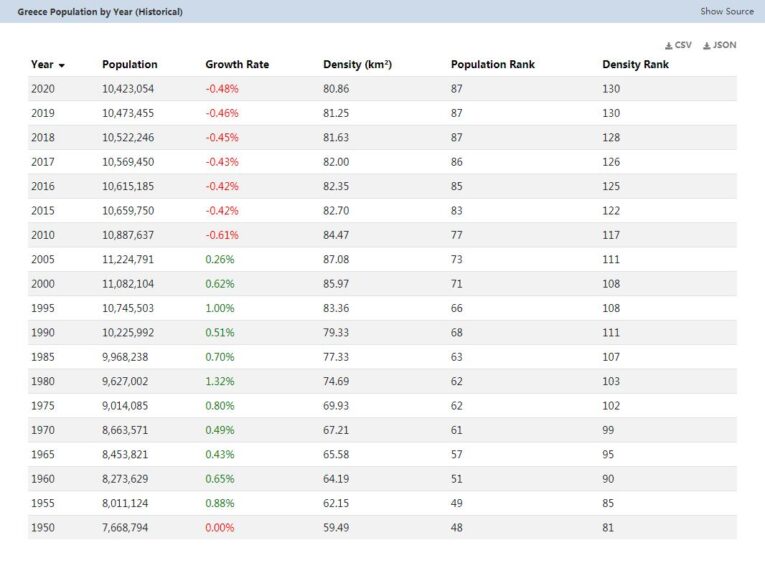 Slowly but steadily, however, the Greeks, with their resourcefulness and ability, managed to recover, indeed, especially in the port cities, by virtue of very active trade, several families reached a real state of wealth. Many other families entered the Turkish administration creating a discreet living space and still others emigrated founding in many European cities of thriving communities, always ready to help compatriots remained at home.

The one who worked hard in this activity was the Orthodox Church; it helped keep the national sentiment of the Greeks alive and was always ready to support the anti-Turkish riots. Everyone was always united waiting to be able to free themselves once and for all from the oppressor. And this opportunity came at the end of the eighteenth century when the Turkish empire inexorably lost its power.

Between 1820 and 1830 Greece was the scene of continuous guerrillas. The Turks were cruelly repressive but the Greeks did not lose heart. Episodes of heroism were carried out in the Peloponnese by the fighters led by Teodoro Colocotronis while Andrea Miaulis led the fight on the sea against the powerful Turkish fleet. The heroism of the Greeks moved the whole civilized world. Many volunteers came from different countries: among them the English poet Lord Byron and the Italian Santorre di Santarosa, who died in Sfacteria in 1825, stood out.

The Turks committed many atrocities in the face of which France, Great Britain and Russia moved. Alliances with each other against the Turks destroyed the Egyptian fleet, which came to the aid of the Turks in Navarino in 1827. Defeat was inevitable. With the Treaty of Adrianople the Sultan had to recognize the independence of Greece. However, after independence, Greece faced a long period of unrest due to the disagreement between the various political currents. Then the three liberating powers succeeded in obtaining the election of their trusted men to sovereigns of Greece. And so in 1832 Otto I, prince of Bavaria, went to the throne first. Athens was elected capital. In 1844 the king had to grant the Constitution and in 1862, forced to abdicate, he returned to Bavaria.

The crown passed in 1863 to George I, prince of Denmark. He united all the Ionian islands of Greece, except Crete, which remained in the hands of the Turks. This situation in 1897 meant that Turkey and Greece returned to the war. The latter suffered several defeats and eventually, on December 4, 1897, she had to accept peace. But he did not give up his aspirations to recover Crete and in 1912/13, allying himself with Serbia, Montenegro and Bulgaria, attacked Turkey. This was the first Balkan war.

In 1913 a conflict broke out between the allies who in the same year reconciled and Greece had part of Epirus, Crete and Thessaloniki. It was the Second Balkan War, in which King George I was assassinated in Thessaloniki, that his son Constantine rose to the throne. But during the reign of George I, Eleuterio Venizelos, a jurist and liberal statesman, appeared on the political scene of the country, who led the government with many merits since it contributed to the annexation of Crete and ensured his homeland the advantages that derived from the two Balkan wars. He made Greece a modern state and led it through the difficult periods leading up to the First World War.

However, since the political life of Greece was very agitated, he came to disagree with King Constantine, who wanted to declare his neutrality, while allowing the Franco-Anglo-Italian troops to fight on their own ground.