In terms of (constitutional) law, all citizens of As have equal rights and obligations. Corresponding international declarations were also signed and almost all of them ratified (see OHCHR Country Profile Georgia).

On the day of human rights, on December 9th 2011, the EU ambassador P. Dimitrev both in Georgia and abroad, in regard of the upcoming parliamentary and presidential elections and how Georgia works towards the creation of a tolerant and pluralistic political culture. Other challenges are the need for greater independence of the courts, the large prison population, and the accountability of law enforcers when things go wrong. We continue to have concerns with respect to labor rights, and the promotion of social dialogue. “In April 2018, the 11th”EU – Georgia Human Rights Dialogue “took place, which acknowledged the progress made in democratization using the example of the local elections in 2017, but at the same time again identified the basic problems:

Internationally, questions of human rights in connection with the armed conflicts in Abkhazia / South Ossetia (blog) are discussed. In December 2011, the European Court of Human Rights declared a lawsuit by Georgia against Russia admissible. Georgia is suing against the backdrop of the August War 2008. Georgia accuses Russia of numerous human rights violations against the civilian population in the Georgian province of South Ossetia, which was occupied by Russia, and in the Georgian enclave of Abkhazia. Russian soldiers had expelled, tortured and killed people from their homes, the complaint said. See also Human Rights Watch 2016 and Amnesty International’s 2017/18 Annual Report.

Both reports also find weaknesses in the recognition of the rights of lesbians, gays, bisexuals, transgender people and intersex people. An amendment to the constitution in spring 2016 only established marriage between men and women. In this context, there were very emotional public discussions in 2016, but also massive attacks at demonstrations by gays and lesbians. The latter are still stigmatized socially (role of the Georgian Church).

In August 2018, there were mass demonstrations against arbitrary police behavior in dealing with drug addicts. A comprehensive report on the drug problem in Georgia can be found on Human Right Watch.

In the context of numerous human rights violations, reports include the poor situation of prisoners in prisons, violations of children’s rights and impunity for torture carried out by security forces. Furthermore, the situation of the internally displaced persons (approx. 260,000 people) displaced during the Georgian-Russian war in 2008 remains critical, as many of them are unlikely to be able to return to their home areas (Amnesty International). On the other hand, it should be noted positively that the Georgian ombudsman, who represents the rights of citizens vis-à-vis the government and the authorities, seems to have a lot of influence. “Quoted in VENRO on the basis of Aprasidze 2010.

The Freedom Institute (founded in 1996) is one of the activists of the Georgian human rights movement. It was the sponsor of the 2003 Rose Revolution with the student organization Kmara. Public campaigns were (were) directed against corruption in the education sector, against religiously motivated violence and attacks by law enforcement authorities. Saakashvili’s reform projects in these areas after 2004 can be traced back to the Institute’s influence. According to wikipedia, it now publishes an annual report on the human rights situation in Georgia and publishes the monthly magazine Freiheit. In addition to the main office in Tbilisi, it has five regional offices in Georgia. Several thousand people are advised there on legal issues every year. 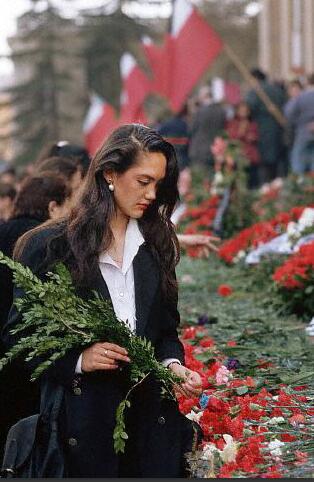 When speaking of the successes of the government under Saakashvili, the first thing to mention is the fight against corruption. If the dimensions were particularly large in all areas of life in Georgia – Georgia was considered the “Mafia center of Eastern Europe” – today Georgia is at the forefront of the fight against corruption among the Eastern European countries. A central signal was the 2004 police reform, during which more than 80% of all police officers were dismissed. It was flanked by reforms in the judiciary and the transition to the “electronic desk” in various levels of the state apparatus and administration (see also Anti-Corruption Reforms in Georgia, in: Caucasian Analytical Digest 2011).

In 2015, only around 13% of the population stated that they experienced forms of bribery or corruption. In the “Corruption Perception Index 2011” by Transparency International (TI), Georgia was ranked 64th with a score of 4.1, ahead of Armenia (129) and Azerbaijan (143). In 2015, Georgia was ranked 48th out of 168 countries, which is one Continuation of the course testifies. Factors for the calculation are the extent of bribery in the government sector, commissions from the public award of contracts and the misappropriation of public funds.