At the end of the 1980’s there were increasingly violent clashes between the communist rulers and the resurrected Georgian national movement and the national movements in the areas inhabited by ethnic minorities. On April 9, 1989, Soviet paratroopers used spades and poison gas to break up a non-violent demonstration in front of the government building in Tbilisi. 20 Georgians were killed and hundreds injured. On October 28, 1990 there were multi-party elections for the Supreme Soviet. The winner of the election was the nationalist electoral alliance “Round Table – Free Georgia” (Georgian Mrgvali Magida Tavisupali Sakartvelo). It received 62% of the vote. Its chairman Swiad Gamsachurdia(1939 – 1993) became chairman of the Supreme Soviet. In the referendum on March 31, 1991 on state independence, 98.9% of the votes cast were in favor of breaking away from the Union. Georgia declared independence on April 9, 1991, and on May 26, 1991 Gamsakhurdia was elected the first president of independent Georgia. 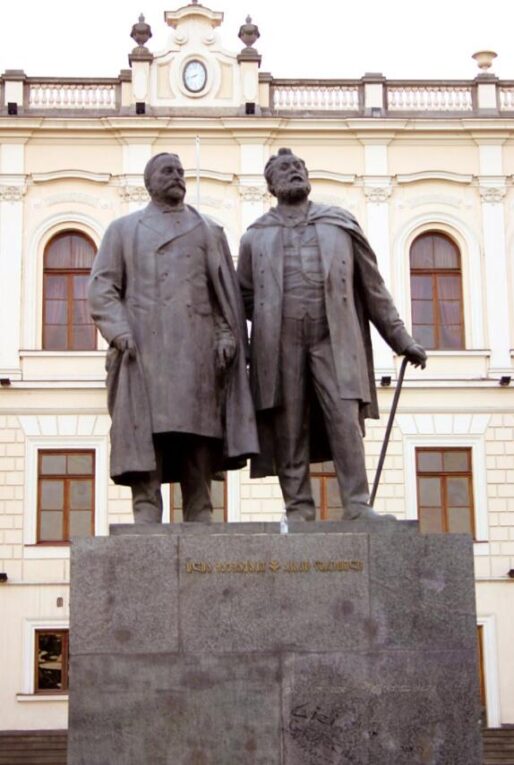 On December 22, 1991, less than 7 months after Gamsakhurdia was elected president, an armed uprising broke out with the participation of parts of the Georgian armed forces. Gamsakhurdia, whose nationalist course had divided Georgian society in several respects, fled to the Russian republic of Chechnya in the North Caucasus and died under circumstances that are still unexplained on December 31, 1993 in western Georgia after attempting an armed uprising in Mingrelia with his supporters would have. In 2007 he was transferred to the Georgian capital and buried on the Pantheon on Mtatsminda.

A self-proclaimed Georgian State Council, the leadership body of the putschists, brought Eduard Shevardnadze (1928-2014) back to Georgia as chairman and interim president. In 1992 Abkhazia declared itself independent from Georgia. Shevardnadze dispatched the National Guard, which was repulsed by Abkhazian troops after bloody fighting. There was ethnic cleansing in Abkhazia. 250,000 ethnic Georgians had to leave Abkhazia, and an estimated 10,000 were killed.

In 1995 Eduard Shevardnadze was elected President of Georgia. Re-elected in 2000, Georgia moved closer to the West politically, became a member of the Council of Europe and aspired to membership in the EU and NATO. However, the population rapidly became impoverished, the infrastructure deteriorated, the country’s energy supply collapsed, unemployment peaked, and corruption assumed mafia-like proportions.

Under the leadership of young reformists such as Mikhail Saakashvili, Zurab Schwania and Nino Burschanadze, the government was overthrown in autumn 2003. In 2004, M. Saakashvili took office as the new president and initiated a reform course that ended in the parliamentary elections in October 2012 as the ” era of the rose revolution “. The coalition “Georgia’s Dream” (GT) under the billionaire B. Ivanishvili replaced Saakashvili’s “United National Movement”. Saakashvili, who took on Ukrainian citizenship after his tenure, became stateless after his failure in Kiev and in July 2018 from a Georgian court in absentia (he lives in the Netherlands) for 8 yearsSentenced in prison for abuse of office.

In May 2013, GT’s candidate Georgij Margwelaschwili won the presidential election with 62% as the new president. In the course of 2014 there were disagreements in the governing coalition, which led to a domestic political crisis in November. Defense Minister Irakli Alasania was dismissed, Foreign Minister Maia Punjikidze and the Minister for Integration with Europe, Aleksi Petriashvili, resigned. The Free Democratic Party left the coalition. Only at the end of 2015 did the domestic political situation calm down relatively. Power struggles broke out again in the run-up to the parliamentary elections on October 8, 2016; however, they did not hinder a peaceful change of power, which brought Georgia international prestige.

According to businesscarriers, with the constitutional amendment introduced, Georgia embarked on the path from a presidential republic to a parliamentary democracy that continues to adhere to European standards and at the same time strives to relax relations with the Russian Federation. However, the frequent changes in government and increased protests since 2017 show that – in spite of internationally valued reform policies – the governments with the “Georgia’s Dream” party at the top are failing to improve the living conditions of large sections of the population. Demonstrations against drug policy and for / against the social ostracism of minorities (SL scene) are politically instrumentalized, with right-wing extremist and ultra-religious groups often provoking. The mass protests in Tbilisi reached a preliminary climax on June 20, 2019. It was triggered by a meeting of the “Inter-Parliamentary Assembly of Orthodoxy”, which was to take place in Tbilisi from June 19 to 22, and which annually receives Christian Orthodox members of parliament from around 25 countries gathered in a dialogue forum. As the President of the Assembly, Russian Duma deputy Sergei Gavrilov, opened the session in Russian from the Presidium in the Georgian Parliament, there were violent protests. Government representatives of the “Georgian Dream” spoke of a “protocol error” and the President of Parliament resigned from his post. On the night of 20./21. More than 300 protesters were arrested on June 6th, and police crackdown with tear gas and batons prompted the interior minister to resign. On June 27, the government of Mamuka Bakhtadze took over their work. At the same time, the “National Movement” under Saakashvili was accused of having provoked the attacks. Observers assess the events in the context of the upcoming parliamentary elections in 2020. Although the parliamentary elections on October 31st were relatively peaceful, the balance of power has not yet been restructured. The opposition parties do not recognize the election result with the victory of the “Georgian Dream” and refuse to participate in the new parliament. Mediation talks under the leadership of Western ambassadors began on November 12, 2020.