Georgia – with approx. 25,000 rivers, over 12,000 historical monuments, a strong spatial differentiation and a multitude of cultural landscapes in a very small area – is located in the demarcation to the Russian Federation and seeks proximity to Western Europe. A process with eruptions and contradictions, opportunities and problems.

Further progress in rapprochement with the EU and German-Georgian relations

According to ehistorylib, the aim of Georgian foreign policy is to strengthen relations with the European Union and also with the Council of Europe, of which it has been a member since 1999. On July 1, 1999, EU partnership and cooperation agreements with Georgia, Armenia and Azerbaijan entered into force. On the occasion of the European Council in Dublin in June 2004, Georgia and its two South Caucasian neighbors were accepted into the European Union ‘s neighborhood initiative. The conclusion of Action Plans with the three South Caucasus countries of Georgia, Armenia and Azerbaijan took place within the framework of the Neighborhood Policy in November of 2006. As part of the “Eastern Partnership”, negotiations on the conclusion of an association agreement with Georgia began in July 2010 which was signed with the EU on June 27, 2014 and entered into full force on July 1, 2016 with the deepened and comprehensive free trade area. Around 300 reform requirements are intended to pave the way to a deeper and comprehensive free trade area with the EU, with three areas being favored: the judiciary, the public service and the development of rural regions. The following agreements exist to facilitate trade: Deep and Comprehensive Free Trade Area (DCFTA) with the EU (in force since July 1, 2016); EFTA (in force with Iceland and Norway since September 1, 2017, with Liechtenstein and Switzerland since May 1, 2018), there has also been a free trade agreement since 2018 with China. Bilateral programs with a volume of EUR 610 to 746 million are planned until 2020. As part of its global response to the COVID-19 outbreak, the EU is mobilizing an emergency aid package for the Eastern Partnership countries of up to € 1 billion. The EU supports its partner countries not only in the area of public health, but also in cushioning the socio-economic effects of the pandemic.

Georgia has particularly close ties with Germany. Building on diverse historical traditions, the Federal Government supports the political, economic and social transformation process. Since 1992, Germany has supported Georgia with over EUR 1.066 billion. In addition, commitments totaling 298.85 million euros have been made within the framework of regional cooperation (regional approach of the South Caucasus Initiative). Germany supported the conclusion of the association agreement between the EU and Georgia, the admission of Georgia, Armenia and Azerbaijan to the European neighborhood policy and the EU decision to create an Eastern Partnership. The German Bundestag voted on March 26, 2015 the Association Agreement. A visa facilitation and readmission agreement between the EU and Georgia came into force on March 1, 2011. In April 2017 a “German-Georgian Friendship Year” was officially opened. Georgia presented itself as a guest of honor at the Frankfurt Book Fair in autumn 2018. The last state visits took place in August 2018 when Chancellor Angela Merkel visited Georgia and in February 2019 President Salome Surabishvili was on a visit to Germany. In April 2020, Prof. Dr. Levan Izoria (born 1974, lawyer, doctorate at the University of Göttingen) took up his post in Berlin as the new extraordinary and plenipotentiary ambassador of the Republic of Georgia.

Relationship with the USA

Relations between Georgia and the United States are geared towards a future of partnership: the United States is the largest bilateral donor of development cooperation funds and a major foreign investor in Georgia. In January 2009, the US and Georgia signed a “Charter of Strategic Partnership”. Since the “Rose Revolution” in November 2003, the USA has gradually increased its commitment in many areas of development. In terms of foreign policy, too, the US government advocates Georgian issues, including the rapid accession of Georgia to NATO. US support for the Georgian Army in the context of various cooperation, training and equipment programs belongs in this context.

Georgia became the first South Caucasus country to become a member of the Council of Europe on April 27, 1999. In 2000 it joined the World Trade Organization. In Abkhazia, the UNOMIG mission, through military observers (including 12 members of the Bundeswehr), has been helping to monitor the ceasefire since 1993. The UN mission in Georgia has been supporting the development of democratic institutions since the early 1990’s and advocating a political solution to the South Ossetia conflict. Her mandate, like that of the OSCE Mission, ended in June 2009.

Georgia aims to join NATO; In a referendum on January 5, 2008, 72.5 percent of voters supported this goal.

After the conflict broke out in August 2008, NATO decided to provide Georgia with humanitarian and technical support. A NATO GEO commission was set up to develop and evaluate annual plans for Georgia’s accession to NATO. At the NATO summit in Wales in September 2014, G. did not achieve a “Membership Action Plan”, but a comprehensive “package” for cooperation. 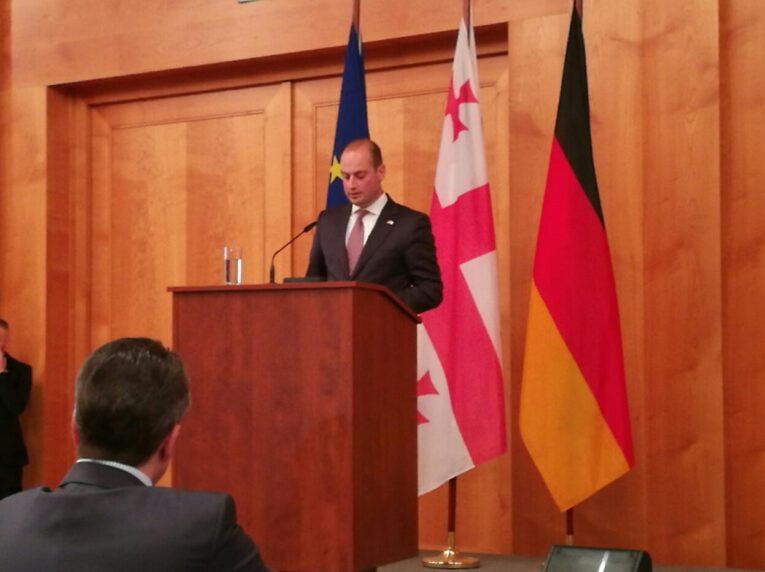