Georgia is a democratic republic with a strong presidential apparatus and centralized administration. Critics also speak of a “defective democracy” and “authoritarian liberalism” (FES, Jobelius), because although access to politics is formally secured through free and secret elections, political and civil rights are repeatedly restricted and independent control of violence is not or only inadequately functioning. According to the 2016 Bertelsmann Transformation Index, 46% of the population rated Georgia as democratic and 39% as undemocratic in 2015.

According to constructmaterials, Georgia’s parties still have the character of patronage parties. From 1995 to November 2003, the “Georgian Civic Union” led by President Shevardnadze was the most influential party in the country. In the parliamentary elections on October 31, 1999, the citizens’ union won an absolute majority with 41.85% of the vote. Numerous politicians at the head of today’s presidential apparatus and government emerged from the ranks of the citizens’ union. Between autumn 2001 and summer 2002 they had fallen out with Shevardnadze after the division, corruption and mismanagement led to the impoverishment of a majority of the population.

After the ” Rose Revolution ” and Shevardnadze’s resignation in November 2003the citizens’ union fell apart. As a beacon of hope for a new democracy movement, the aim of the new President Saakashvili was to build a strong democratic state, to liberalize the economy and to reform state institutions. Some efforts have been successful. He managed to curb corruption in ministries, offices, universities and the police. What remained, however, was the intermingling of political and economic power in Georgia’s highest social classes. As under his predecessor Shevardnadze, an elite emerged under Saakashvili that achieved its prosperity less on its own than through a network of influential relationships. The new strong force in Georgia became the National Movement – Democrats (NB). In the parliamentary elections on March 28, 2004, the former opposition won a victory with 66.24% of the vote. The party united the supporters of the velvet revolution in Georgia and could count on support from the Georgian educated classes. The president was the chairman and leading figure. The Georgian democratization process remained incomplete and unstable. This applies above all to questions of the separation of powers. The executive dominates the political arena, and Saakashvili succeeded in strengthening the president’s rights vis-à-vis the judiciary and parliament. Critics accuse him of autocratic tendencies. Even former allies of the president distanced themselves from him.

In the course of 2004 and 2005 there were repeated dissociations from the National Movement – Democrats. In June 2004 the “Republican Party” separated from the NM. In November 2004 MPs Sviad Dzidsiguri, Koba Dawitashvili and Kacha Kukawa, supporters of the former President Gamsachurdia, left the NM. They founded the “Conservative Party of Georgia”. In October 2005, various MPs around the deputy chairman of the NM group in the Georgian parliament, Dawit Zurabishvili, left the party and founded the opposition faction “Democratic Front” together with the members of the “Conservative Party”. They thought the pace of reform was too slow. On the 25th. 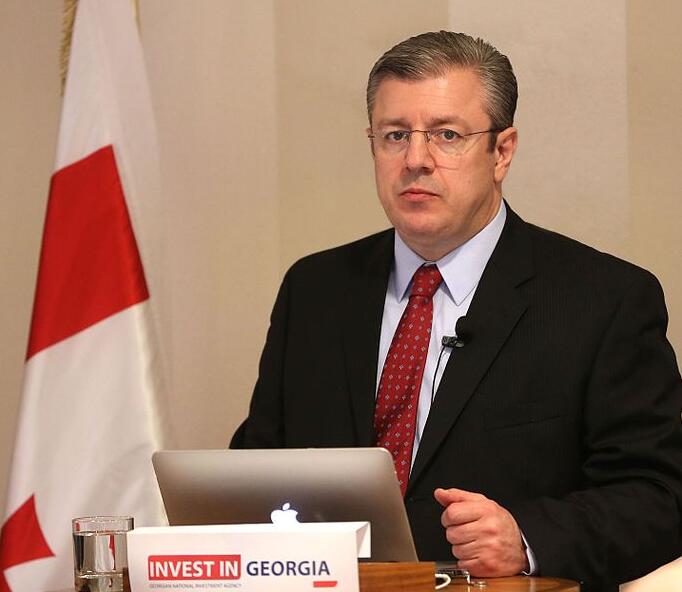 At the end of September 2007, new opposition parties formed the Alliance of the United National Council.

The most prominent political representatives of the National Council included:

Opposition parties boycotted parliament in protest against what they believed were fraudulent elections in May 2008. International election observers, however, found only minor irregularities.

The advance of Russian troops into Georgian territory in August 2008 led to a temporary alliance between representatives of the opposition and the government. Saakashvili had to consent to a restriction of presidential rule, as provided for in the new constitution that came into force in 2013. At the same time, clearer steps have been taken to fight corruption and strengthen the rights of the regions.

The last parliamentary elections took place in October 2016, the last presidential elections in 2018. Reports on the election campaign can be found on the eurasianet website.

The greatest challenger to Saakashvili was the businessman and millionaire Ivanishviliwith his party alliance “Georgia’s Dream”. With the victory of his opposition coalition (54.9 percent of the votes against 40.4 percent for the United National Movement of Saakashvili), he took over the business of government on October 25, 2012. However, since it came to power in October 2012, the GD-led government (until November 2013 under the oligarch Iwane Ivanishvili, from November 203 until December 2015 under Garibashvili) had not managed to stimulate economic growth and, above all, to create jobs. The leadership experienced the greatest government crisis in 2014: On November 4, Prime Minister Irakli Garibashvili (also chairman of the “Georgian Dream – Democratic Georgia” party) dismissed the defense minister and leader of the “Our Georgia – Free Democrats” party,Irakli Alasania after he criticized the arrest of several senior officials of his ministry for corruption investigations as politically motivated and named the sabotage of Georgia’s Euro-Atlantic course as the actual target. Alasania’s dismissal was followed by a wave of resignations from prominent representatives of a western-oriented foreign policy course. He was followed by Foreign Minister Maja Pandschikidze (Alasania’s sister-in-law), as well as the Minister of State for European and Euro-Atlantic Integration and Alasania’s party friend, Alexi Petriaschwili. Results of the survey by the NDI in cooperation with CRRC Georgia speak of a severe loss of confidence in the government coalition “Georgian Dream”. Only 18% were in favor of re-election. Deficits are seen primarily in connection with unsolved or sluggish reforms in the economic and social fields. The government’s October 2015 assessment of the progress of the reforms mainly summarized the progress made. However, from the point of view of the Konrad Adenauer Foundation- To understand the resignation of the Prime Minister in December 2015 as a signal to give domestic and foreign policy new impetus before the 2016 parliamentary elections. With the successor to former Foreign Minister Georgi Kvirikashvili and the election of Salome Zurabishvili in the runoff election on November 28, 2018 with 59.52% of the votes cast as President of the country, the position of the “Georgian Dream” seems to be further consolidated. Both were supported by the movement and represent a targeted approach to Western Europe. How the government is coping with the CORONA crisis will not least have an impact on the outcome of the parliamentary elections due on October 31, 2020.