Julius Caesar, who found himself repeatedly engaged in wars against the Belgians, in his writings said that they, of all the peoples of Gaul, were certainly the strongest.

At that time the Belgians were in the north-eastern part of Gaul, called Gallia Belgica and occupied a much more developed territory than today. There is no previous news, therefore the history of their population goes back to the beginning of the first century BC; they were of Germanic origin and had settled on the territory since the most remote antiquity. In 57 BC the legions of Julius Caesar occupied the area. Then the Romans stayed there for 4 centuries. It was inevitable that such a long domination would leave indelible traces, and in fact the Belgians gradually became more and more Romanized, until they used all the ways of life of the Romans.

But from the third century after Christ the barbarian invasions began and the Romans, who were unable to counter them, withdrew and left the Belgians under their domination.

The barbarian peoples who occupied the land of the Belgians most of all were the Franks who settled there since the fifth century.
In the ninth century, at the time of Charlemagne, Belgium, extended as it is today, was of great importance for the Carolingian Empire, given its central geographical position.

The Carolingian domination of Belgium brought significant improvements to the country; many schools were founded, libraries opened and agriculture developed.

At the death of Charlemagne the empire was divided into fiefdoms governed by the most powerful lords who were real sovereigns. But in addition to the fiefdoms, two Principalities were also formed: Flanders and Lotharingia. The latter depended on the emperor of Germany for a few years, but became independent around the twelfth century. The princes of Flanders, however, enlarged the country, conquering Artois, then a region of France. 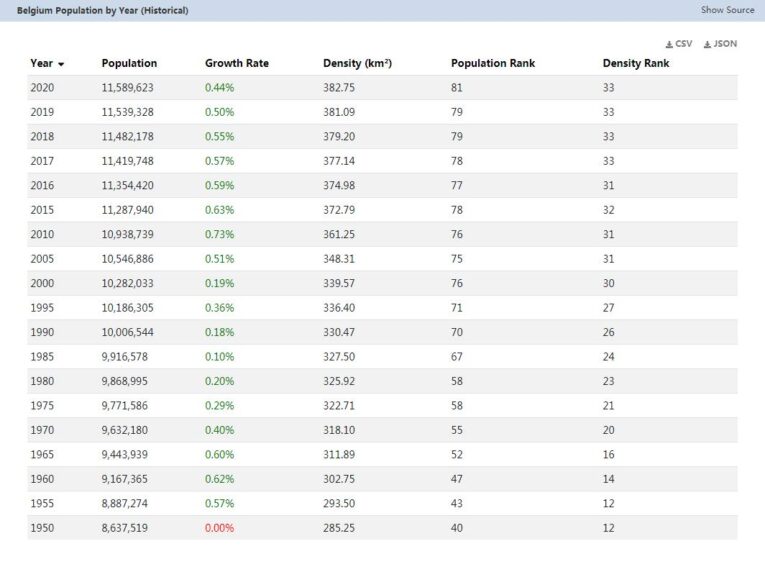 And always starting from the XII century the contrasts began both in the fiefdoms and in the principalities, as the populations rebelled against the authority of their lords. And in many Belgian cities the citizens managed to drive out the feudal lords and founded organizations which were called “Municipalities”. See Countryaah for population and country facts about Belgium.

Belgium is one of the most densely populated countries in the world. In addition to the Brussels agglomeration, density centers are the areas around Antwerp, Gent, Mons and Liège. Overall, 97% of all Belgians live in urban communes, just under 10% in the Brussels region. The Ardennes, which are difficult to access, are only sparsely populated. There is general compulsory education from 6 to 16 years of age. Schools are run by the parishes and, to a large extent, by the Catholic Church, under state supervision. As a result of the Flemish-Walloon language dispute, some universities were split into independent Flemish and French universities.

57% of the population live in the Flemish north, around 33% in the Walloon south. Almost 10% Belgians live in the bilingual Brussels region, which is located in the Flemish region (Fig. 3). The German-speaking population, who mainly lives in the areas of Eupen and Sankt Vith bordering Germany, accounts for 0.7% of the total population. The Flemish-Walloon language border has hardly changed since the Middle Ages. Although the Flemings have made up the majority of the population since the founding of the Belgian state, the key positions in politics and economics were not infrequently held by Walloons until the recent pastoccupied. Since the decline of the Walloon coal industry and the associated iron and steel industry, the economic focus of Belgium has shifted to the Flemish part of the country. This imbalance has repeatedly led to violent conflicts between Flemings and Walloons in Belgium.

In order to settle the centuries-long “language dispute”, Belgium was transformed into a federal state with the Federalization Act of 1980. Since then the country has been divided into three regions, Flanders, Wallonia and Brussels, into three communities, the Flemish-speaking, the French- and the German-speaking, as well as into four language areas, the Dutch, the French, the German-speaking and the bilingual Brussels-speaking area. The communities and regions have their own legislative and executive bodies. The regions are allowed to raise taxes themselves, regulate the social area and even conclude contracts with third countries.

The Municipalities of Flanders did not know good luck since France, in 1214, managed to subdue the entire principality. And this lasted until 1302 when the citizens of the principality rebelled against the French, defeated their army in the battle of Kortrijk and regained their freedom.

In 1369 Philip the Ardito, by marrying the daughter of the Count of Flanders, became lord of this principality. He was Duke of Burgundy and brother of the King of France Charles V. In a few years Philip the Ardito expanded his possessions. Upon his death in 1404, the Duchy of Burgundy included the so-called Netherlands, that is, Holland and Belgium together. These, at the beginning of the 16th century, inherited Charles V of Habsburg, the future king of Spain. Thus the Belgians found themselves under the rule of the Spaniards.

Meanwhile, however, Protestantism was spreading in the Netherlands. The King of Spain published many edicts to ban this new religion. Everything was useless for the northern populations of the Netherlands, that is, for the Dutch, who instead joined it en masse. Holland therefore became independent. The Belgians, however, remained Catholic and under Spanish rule.

On the death of Charles II, king of Spain, Philip of Bourbon, nephew of the king of France, succeeded the throne; it was the year 1700. But the Austrian Royal House boasted of the rights for the succession to the throne of Spain. A war ensued, following which France had to surrender Belgium to Austria.

The Belgians rebelled many times to free themselves from Austrian rule but were always subdued. And after the Austrians the French arrived during the period of the Napoleonic Empire.
With the fall of Napoleon, the Vienna Congress of 1815 constituted the Kingdom of the Netherlands, joining Belgium and Holland together.

And this represented a serious blow to the Belgians who had longed to be free. So they didn’t give up, they gathered in secret societies and after 15 years from Congress they were ready to fight.

In August 1830 all the people of Belgium rose up; the fight lasted 4 days, the Dutch troops were defeated and Belgium was independent. The new Belgian king was Leopold, prince of the house of Saxony-Coburg. It was the year 1831. His son Leopold II succeeded his death; he was a skilled politician and diplomat and in 1885 he enriched his country by conquering the Congo which was precisely a colony of Belgium.

At the outbreak of the First World War, Albert I was king of Belgium. It was the year 1914 when he declared the neutrality of his country, but to no avail because Germany invaded the territory. Then the ruler was forced to fight and regained freedom at the end of the war in 1918 with the defeat of Germany.