Irish art history dates back to Stone Age culture, before agriculture was introduced in ca. 4000 BCE Over a thousand megaliths have been found, including Newgrange, Knowth, Dowth and Creevykeel, where stones are decorated with geometric ornaments. Already here there are spiral patterns that were further developed in the Bronze Age (ca. 2000-500 BCE) and later in the Iron Age (500 BC – 400 AD). From about 1800 BCE trunks elaborate gold ornaments. With the invasion of the Celts during the last millennium BCE. felt the influence of the Hallstatt culture and later La Tène-the culture of the traditional geometric motifs. In addition to metal works such as fibulaca, harness, swords and bronze plates, some decorated stone monuments from this time have also been preserved. 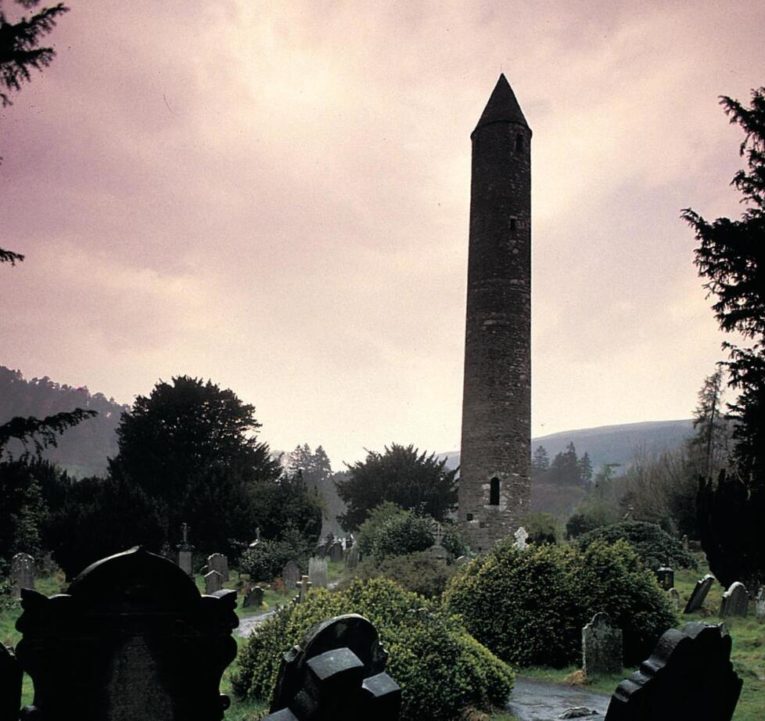 In Glendalough in Wicklow south of Dublin is one of the distinctive round stone towers that was built as a result of the Vikings’ attacks.

The island was Christianized in the 400s, and in the centuries that followed, the country is experiencing a flourishing era that also characterizes this period’s art. In Irish Christian medieval art, the living Celtic tradition is felt, but also influences among other things from Scandinavia (the Vikings ). Characteristic are animal and ribbon braiding ornaments, often combined with geometric patterns such as spiral shapes. It is especially in the field of church and book art that this mixture of elements is evident. But ornamental objects are also decorated with the same type of decor, such as the Tara buckle from the 700s.

The most famous of the many illuminated manuscripts from this period are The Book of Durrow, the Lindisfarne Gospel of 720 and the Echternach Gospel of the late 900s. The development goes from the use of strong ribbon braids and animal ornaments to representations in which human figures are given a central place.

From this time also come the many stone crosses. A good example is the Clonmacnoise cross, where the cross arms are connected to a wheel. This symbolizes the faithful Christ who rules the wheels of the world at the center of the cosmos. This is an East Christian symbol that can be traced back to Byzantium and the Copts. The many round stone towers that were built at a number of monasteries during this period have had a dual function, such as the bell tower and the refuge of Viking attacks. However, such towers were built as late as the 12th century.

From the High Middle Ages onwards, Ireland came under the influence of Anglo-Norman, and national Irish art loses its originality. Large monasteries such as Mellifont, Jerpoint, Boyle and so on are common Cistercian sites, the Clonfert cathedral is a fine Romanesque stone church, while the St. Patrick cathedral in Dublin, the cathedrals in Cashel and Kilkenny as well as the Franciscan monastery in Sligo are good examples of Gothic style. 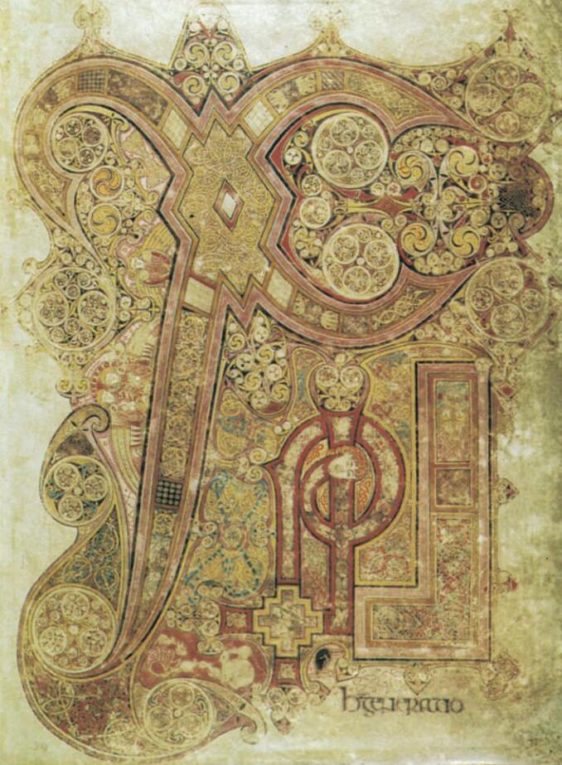 Initial from Book of Kells, one of the most well-known illuminated manuscripts, from ca. 800 possibly Trinity College, Dublin. 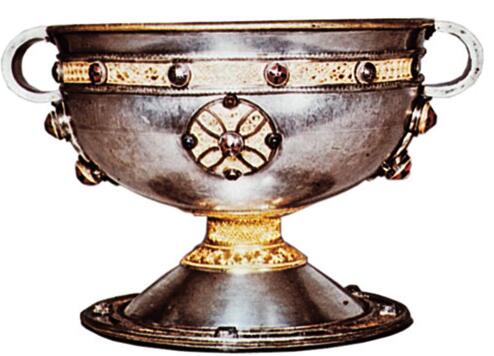 Ireland. The Ardagh chalk, one of the foremost examples of early metal medieval Irish art. National Museum of Ireland, Dublin.