From the time when Iceland was populated from Norway (c. 870–930), little is preserved, but we know there must have been a well-developed wood carving and silversmith art. The stories tell of richly decorated guild halls, including at Olav På, with painted or carved representations from the history of the legend or the chief’s own companies. Remains of houses and hoofs have been excavated, including in the Þjórsá valley, and show the oldest building custom, the longhouse (bowl) with pillared roofs and walls of stone and turf.

After Christianity was introduced in 1000, art was given its foremost task in decorating the churches. A major work is the richly carved church door from Valþjófsstaðir (12th century) with picture scenes and dragon ornaments. Carved door poles and so on in Romanesque style, crucifixes and Madonna statues have also been preserved. Smaller objects such as caskets, different kinds of pictures and bishoprics were made of walrus rose and the like. Stone sculpture, on the other hand, only appeared exceptionally. Among the finest metal works was the cathedral shrine ; the most magnificent was what Bishop Pål Jonsson (dead 1211) had the country’s leading jeweler Torstein make in gold, silver and precious stones for the holy Torlaks equal. A couple of simpler pieces of wood, clad with gilded copper plates, are preserved, as are some Romanesque and Gothic altarpieces in silver.

The country also had a flourishing textile art that was especially cultivated at the cathedrals, but also at the country’s two nunneries. Preserved are some late medieval embroidered altar cloths and the like in a peculiar technique that was later forgotten, furthermore some liturgical textiles.

Although there has also been a room decorating painting, what is preserved is purely a miniature art. Many Icelandic manuscripts are richly illuminated, both sagas, laws and liturgical books, most in Gothic style from the time after 1300, but with numerous Romanesque reminiscences. The most excellent is Flateyjarbók, illuminated by the priest Magnus Torhallsson ca. 1390. Something Younger is a late Gothic sketchbook with drawings.

After the Reformation lived art further as folk art in a rich wood carving with flettverk- and karveskurdmønster and yet with strong Romanesque elements. They also continued to make richly decorated drinking horns in the Middle Ages, and the silversmith industry stood high, which was mainly due to the great need for jewelery for women’s clothing. The riding clothes were often adorned with ornamented brass plates.

As the 18th century continued to make new transcripts for older manuscripts, miniature art was still alive. Among other things, Björn Grímsson made two illuminated copies of Jónsbók just after 1600. The decorative church painting was also cultivated, as was the textile art (church equipment, bed and wall rugs, pillowcases, woven strips in damper technique).

In the sculpture, Einar Jónsson (1874–1954) is the first big name. He has made a number of public monuments in Reykjavík. Modernism has also left its mark in the sculpture. The influence of H. Moore is felt by Ásmundur Sveinsson, while Gerður Helgadóttir has worked on abstract pierced iron sculptures. Sigurjón Ólafsson has performed naturalistic portraits. Otherwise, the very productive Ríkarður Jónsson (1888-1977), brother of the above Finnur Jónsson, can be mentioned.

Icelandic visual artists have made their mark in international contemporary art with, among others, the Guðmundur Guðmundsson ERRO (b. 1932). He likes to put together picture pieces from different eras and cultural circles, and shows in his works a critical attitude towards social, economic and political aspects in our society. He has also made films and happenings. Another central representative of Icelandic contemporary art is Sigurður Guðmundsson (b. 1942). He has worked with staged photographs, performance and installations. The works are often shaped in the mold of international Late Modernism, but with a poetic and tradition-conscious content characterized by his upbringing in Iceland. Since the 1980s he has concentrated more and more on drawing, painting and sculpture, and has also shown that he has mastered monumental sculpture for outdoor spaces. 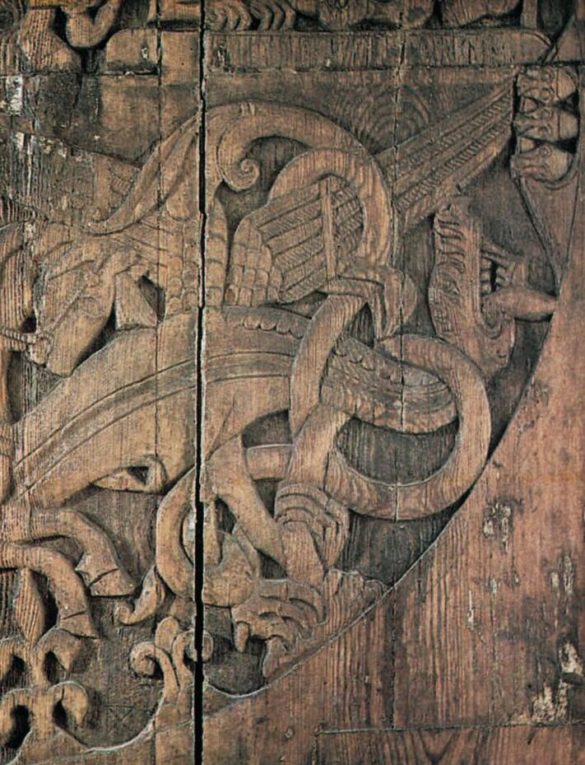 Middle Ages Crescent in Iceland: The Dragon’s Death Match, detail of the church door from Valþjófsstaðir. At the top is a rune inscription.